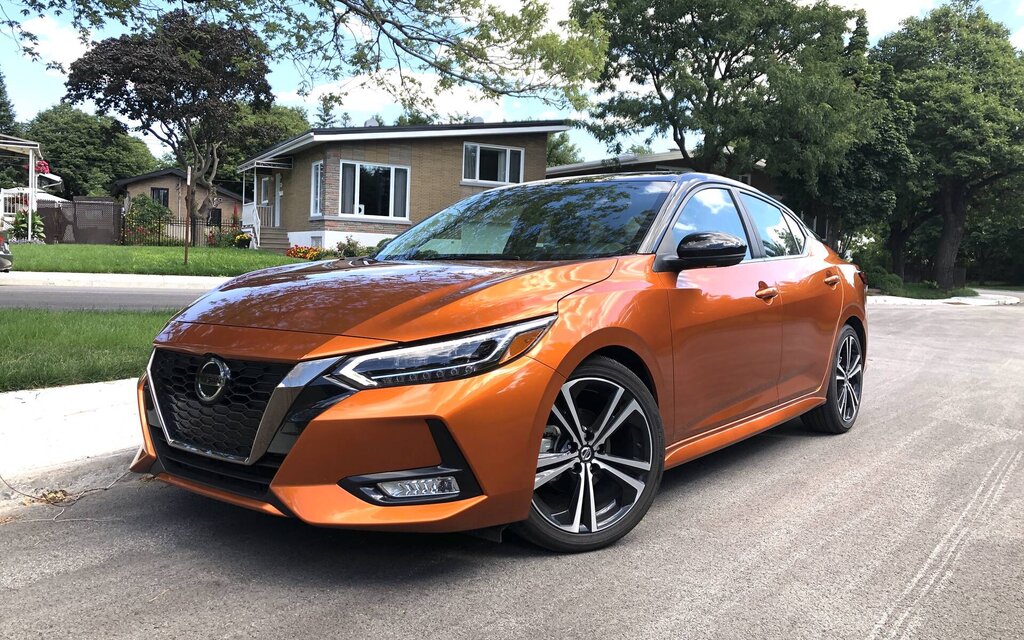 For 2020, Nissan is releasing a completely renewed Sentra. Considering the age of certain products in the range, it is more than refreshing to see the arrival of a new generation of this model formerly at this manufacturer.

We put the 2020 Nissan Sentra to the test for a week and here is our report.

The catch? The transmission!

If the Sentra 2020 is based on a new platform, its mechanics are, on the other hand, more conservative. Indeed, under its hood houses a four-cylinder engine of 2.0 L. Nothing more complicated. It develops 149 horsepower and 146 pound-feet. We are not dealing with a stunning engine, but it fulfills its mandate honestly.

If we opt for a Sentra S, the entry-level version stripped of any convenience, we are entitled to a six-speed manual transmission. At the time of this writing, serious rumors point to the possible arrival of a sports-oriented version which would also be equipped with a manual transmission. It is to be continued.

For now, all other versions of the Sentra, namely the S Plus, SV, SR and SR Prime, are equipped with a continuously variable automatic transmission. Although you get used to its sometimes unpredictable behavior, its reliability is the main downside to the picture: in the past, major problems associated with this box have been identified. We sincerely hope that these failures are now behind us.

The fragility of the continuously variable transmission is not the only issue the Nissan Sentra has faced in past generations. Indeed, the Japanese sedan was particularly sensitive to corrosion. Only time can tell us if this is finally settled.

Room for a family

In 2020, some consumers feel that the moment they find themselves with a family of three or four, they absolutely need a sport utility vehicle (SUV). Of course, all-wheel drive is an asset. But it is far from being a necessity. We have to admit that humans are good at creating needs for themselves… or quite simply at convincing themselves to transform their desires into needs.

That said, after a week at the wheel of the 2020 Sentra, I have come to the conclusion I have already made after driving other sedans like the Mazda3 or the Jetta: we no longer have the compacts we had.

In other words, compact cars are bigger, more spacious and above all, better equipped than before. It is therefore quite realistic to have a compact, like the Sentra, as the primary vehicle for a family of two adults and two children. No need for a CX-5, Tiguan or Rogue… let alone a CX-9, Atlas or Pathfinder. The 2020 Sentra is great for a family and will save you a few hundred dollars a month.

The Nissan Sentra has never been known to be greedy at the pump and it continues to follow that line. In combined driving, Natural Resources Canada announces a summation of 7.1 L / 100 km, which is quite reasonable for a compact with a naturally aspirated engine. At the end of the 500-kilometer test, the rating displayed by the on-board computer was one tenth lower than that of the government agency.

In short, its interior is more neat than before. When driving, we have the impression that it “sits better” on the road and we perceive it to be less soft than the previous generation. We can only rejoice.

It is clear that the Sentra does not stand out by the refinement of its mechanics (no turbo engine version, no hybrid version, etc.) nor by its dynamism as is the case of the Mazda3 or Jetta, for example, in the same segment.

However, it is just as clear that the Sentra is an excellent means of transport in its strictest definition, keeping in mind that its continuously variable transmission could eventually fail.

In video: can Nissan go up the slope?

Victoria Smith who hails from Toronto, Canada currently runs this news portofolio who completed Masters in Political science from University of Toronto. She started her career with BBC then relocated to TorontoStar as senior political reporter. She is caring and hardworking.
Previous Coronavirus: Germany tightens restrictions
Next He was traveling at 214 km / h in broad daylight on the highway in Lévis