Les Boys: the story of a great Quebec success

He dreamed of transposing the mythical play Brew on the big screen. In vain. Instead, he created The Boys, which would become the most popular in Quebec cinema. By the time ComediHa! takes over in becoming the owner of the brand, producer Richard Goudreau tells the story behind the greatest success of his career.

In 1997, as the Montreal Canadiens hit a low tide a few years after their last Stanley Cup conquest, few, if not to say no one, thought that a comedy about a bunch of guys playing hockey in a garage league would stir up passions to the point of attracting over a million people to theaters.

Before the release of the first film of Boys, as is customary, a screening was organized on behalf of theater owners to present the product to them and gauge their interest. “I remember they had made some challenges. Guy Gagnon [à l’époque chez Cineplex Odéon] had bet the highest. He had said the film was going to make $ 2 million. All the others were below that amount, ”recalls Richard Goudreau.

The final score: over $ 6 million. Unheard of for a Quebec film at that time.

The iceberg of Titanic

same Titanic, one of the highest-paying films in the history of cinema, had not been able to overcome the Boys. By its first weekend in theaters, in December 1997, the James Cameron blockbuster, which starred Leonardo DiCaprio and Kate Winslet, was beaten at the box office by The Boys, which was then in its second week on the screens. Quebec was the only place in the world where Titanic was not number 1.

“One of the producers of Titanic had telephoned the president of [l’ancienne chaîne de cinémas] Famous Players and asked him: “Sorry but what’s Les Boys? ” The guy replied: “I think it’s your iceberg in Quebec,” says Mr. Goudreau, laughing. The success kicked off a series of five films that raised $ 22.1 million at the box office. “It is the largest Canadian film franchise,” proclaims the founding president of ComediHa !, Sylvain Parent-Bédard.

A resemblance to Brew

To say that Richard Goudreau’s initial plan was to convince Marc Messier and Michel Côté to shoot a film inspired by the play Brew. “I dreamed of making this film. This was not the play, I told Marc Messier and Michel Côté that the story would take place ten years later. It was a new story. In the end, it didn’t work out and I understood why. They were afraid it would harm the room because they felt it could still walk. It was a good reason, it lasted 25 more years. “

The project of Boys was born afterward, one day the producer was having a beer and talking nonsense in the locker room after a game of his garage league team.

“I was laughing, I was laughing and suddenly I had a flash: why wouldn’t I make a movie about it? It was the same, ”says Mr. Goudreau, who saw a link with Brew. “No woman goes into a guy’s locker room, like a tavern. “

The rest, as they say, is history. The popularity of Boys has reached a level rarely seen for a Quebec fiction. During the launch of the first film, the team of Boys toured the province to play friendly matches. In each arena, it was packed to applaud Marc Messier, Patrick Huard, Paul Houde, Rémy Girard and company.

Even the former NHL pros were impressed, as evidenced by this anecdote from the shooting of the fourth film, which featured Martin Brodeur, Guy Lafleur, Raymond Bourque and many other stars making up the Legends team. “After lunch, on the last day, as usual, I went to the guys’ locker room to cheer them on. One of the actors asked me if I thought that the guys on the other side would agree to sign their jerseys, ”says Richard Goudreau, who crossed the rink to inquire about the matter with said legends.

“When I arrived, Raymond Bourque said to me: ‘Richard, do you think guys [les acteurs] would agree to sign our sweaters? ” It’s one of my fondest memories with Boys. It moved me so much when I saw the guys come back to the ice with markers. ”

“Stan thought he was in the NHL”

Like several actors who have contributed to the success of Boys, Rémy Girard, alias Stanislas “Stan” Ouellet, the coach of the team and founder of the brewery bearing his name, classifies his long stay at the head of this hilarious team among his fondest memories.

“He’s a character that I really enjoyed playing. A lot, a lot, a lot. […] He is a motivator who had nothing to his test and could cause terrible anger. He was interesting to play because he had a wide range of emotions, ”analyzes this veteran actor with a variety of great roles in his curriculum vitae.

What did he particularly like about Stan? “His great generosity for his team. He thought he was in the National League. No half measures. He really thought he was a hockey greats. What he ultimately was. He was also the father of those guys, ”he says of the proud Boys, for whom the Monday game followed by a visit to the brewery at Stan’s to have a few beers was an immutable ritual.

No one has had an arm twisted to play with Boys. Tried to be the radio voice of the show Good evening champions (he imitates the voice of the late Marc Simoneau), which we hear at the beginning of the first film, Paul Houde wanted so much to get the role of Fern that he made Richard Goudreau believe that he had already been a goalkeeper.

He was far from the only one to skate on the boot. During the on-ice auditions, Richard Goudreau remembers having had “one or two surprises”.

“Roc LaFortune arrived with his tuque, scarf, mittens and a stick with a plastic paddle screwed on to play street hockey. He looked like a snowman, while the others, Patrick Labbé and all, were dressed as hockey players. “

As for Michel Barrette, he was unable to skate, which is why he is always on the bench in the film.

“Not long before, he had been seriously injured in one eye when a spotlight burst during a show in Granby. So he must not fall on the ice so that he does not hurt his head. That’s why he only gets on the ice for warming up, ”says Mr. Goudreau.

As a good hockey coach, Stan has used some of the tastiest expressions of sports language. Rémy Girard says that his famous “in my book to me …” was not in the script. He improvised it during an exchange with Bob, the character of Marc Messier.

Stan was also known to have lots of things tattooed on his heart: the puck, the hockey, the Boys logo and we forget.

“It defines the character perfectly. He was a bit manic, ”says Rémy Girard, laughing.

He was also a father who awkwardly expressed his affection for his son Popol, played by Michel Charette.

“Michel and I had an agreement. Anytime they tried to do a gesture of affection, like hugging or slapping each other on the shoulder, they hurt each other. Our pleasure was to find a new way to hurt ourselves. We were having a blast with that. “

Like the millions of people who have followed the adventures of Boys.

– Do you say Asterix or Asterix?

“Mental toughness … the hardness of the mind”

“- You finished pissing off?

– A prostitute and Fern (Paul Houde) in Les Boys II

Statistics worthy of a scoring champion

(in brackets, the ranking among all Quebec films)

Source: Observatory of culture and communications of Quebec

♦ The Boys was the first Quebec film to attract over a million viewers in theaters.

♦ The Boys was also the first Quebec film to cross the four million dollar mark. Until then, the record for a Quebec film belonged to Cruising Bar ($ 3.1 million in 1989).

The Ilya Kovalchuk of Boys does not want to leave

It is not because the franchise The Boys now belongs to the firm ComediHa! that Richard Goudreau intends to retire.

Now 70 years old, the father of Boys wishes to remain associated with her baby as a co-producer of the next films to be shot. A Quebec feature film and two adaptations, in France and the United States, are in the works for 2022-2023. ComediHa! wants to shoot other movies and bring them back Boys on TV afterwards.

“We have big projects and I need a team like ComediHa! to carry them out, ”says Mr. Goudreau, who uses an analogy with the last season of the National League to describe his relationship with the new administration of the franchise.

“I feel like Ilya Kovalchuk when he arrived with the Canadian. I just hope I will stay longer than him. “

For the new franchisee, there was no question of depriving himself of the expertise of Richard Goudreau.

“For me, it is very important not to kill the DNA of Boys », Explains the president and founder of ComediHa !, Sylvain Parent-Bédard.

Hockey, as we can see, occupies a big place in the life of Richard Goudreau and his family.

To use an expression dear to Coach Stan, they have the puck tattooed on the heart.

His son, Lenny-Jo Goudreau, who notably acted as co-producer of the TV series The Boys and has held the position of vice-president television for several years at ComediHa !, played briefly with the Saguenéens de Chicoutimi, in the Quebec Major Junior Hockey League, with McGill University, as well as in the Semi-Hockey League. -pro.

He is married to goaltender Kim St-Pierre, three-time Olympic gold medalist and member of the Hockey Hall of Fame. St-Pierre also took part in some shootings of Boys, notably as an understudy of the character of Fern, played by Paul Houde.

By announcing the Boys’ sale at the dawn of the holiday season, the ComediHa! smelled the good deal. Here is the collection of sweaters The Boys sporting, for some, cult replicas of the series.

www.journaldequebec.com
Share
Previous Premier League | Tottenham crunches Manchester City, Chelsea imperturbable
Next Are we going to teach how to manage a pandemic? 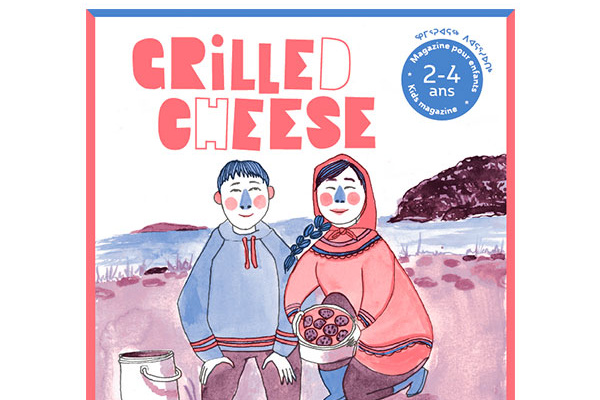 Grilled Cheese, this beautiful craft magazine for children (2-4 years and 5-10 years) innovates these …