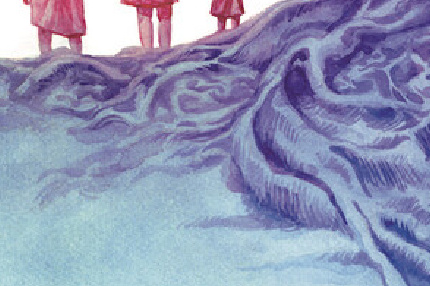 “When the oldest root of a tree dies, the youngest ripens. This is how nature progresses, by generations. ”

Grandmothers always have a word of wisdom up their sleeve for those who listen. That of Djibril and Yasmine Phan Morissette is no exception. These Montreal brothers and sisters were inspired by the writings of their grandmother Khiêm to tell the story of their family of Vietnamese origin in comic strip form. Thus was born Khiêm, mother land, a touching album on the power and – the duty – of transmission between generations. We meet Khiêm, Trang and Yasmine, three women from the same line, three branches of the same tree, but whose life is marked by dramas and very different questions.

“The project was born when my mother decided to translate my grandmother’s memories into French,” explains illustrator Djibril. She died before our birth and these texts have been a direct link with her. ”

The tandem discovered in these writings a “strong, resilient and resourceful woman, who was ready to do difficult things for love”, estimates Yasmine, who signed the scenario. By focusing on the story of this grandmother who grew up in a Vietnam at war, the 26 and 24 year old cartoonists were able to explore their family history, marked by several displacements, in particular the immigration to Quebec of their mother Trang, when she was just a teenager. Adopted by a couple of Quebecers, it took her time to find her place, torn between her two identities.

“I wondered a lot about the issue of transmission,” explains the screenwriter. In each episode, I wondered what a mother would like her daughter to learn from past experiences. “

I realized the direct line that exists between previous generations and me. I have a greater gratitude for the sacrifices my mother and grandmother made, but I also feel a great responsibility: to reap the fruits of all these sacrifices. Writing the album also taught me to better assume my identity.

It is easy to understand from reading the last chapter, while the young woman puts herself on the stage, especially during a trip to Vietnam and a stay in California to reconnect with the family.

Born to a Vietnamese mother and a Quebecois father, the two cartoonists also recognize that being second generation immigrants gives them a freedom of speech that their predecessors did not really have. “We grew up in Montreal North, like our father; we cannot be questioned about the fact that we are from Quebec, launches Djibril. It gives us the privilege of being able to speak on more delicate subjects, such as expressing ourselves on the host society. We have the necessary perspective to do so. The taboo is no longer there and the emotional load is less for us. “I also believe that we have a duty to diversify the conversation, to bring a different voice,” adds his sister.

With this intimate album, illustrator Djibril signs his most personal project, and the one of which he is most proud, he says. It must be said that he is best known for his work at Marvel (The Ultimates, X-Men Gold, Wolverine) as well as for his series Glitterbomb.

Usually I draw superheroes and there I drew my mom, my sister and even me crying. For this album, I was hyper aware of each line I drew, aware that comics would have a bearing in our family. Visually, my style is very different …

Emotions can therefore flow without hindrance. Because it does not matter whether our roots have long been digging into the soil of Quebec or whether they are newly established, the story of these three resilient women remains moving. It brings us back to ourselves and to the holes we leave gaping in our family past. “I realized that many people don’t know much about their family history. It was also my case. Now, I want to explore the other side of my family, the story of my father, ”says Yasmine Phan Morissette.

“With confinement, now is a good time to find out where we come from …”, adds his brother.