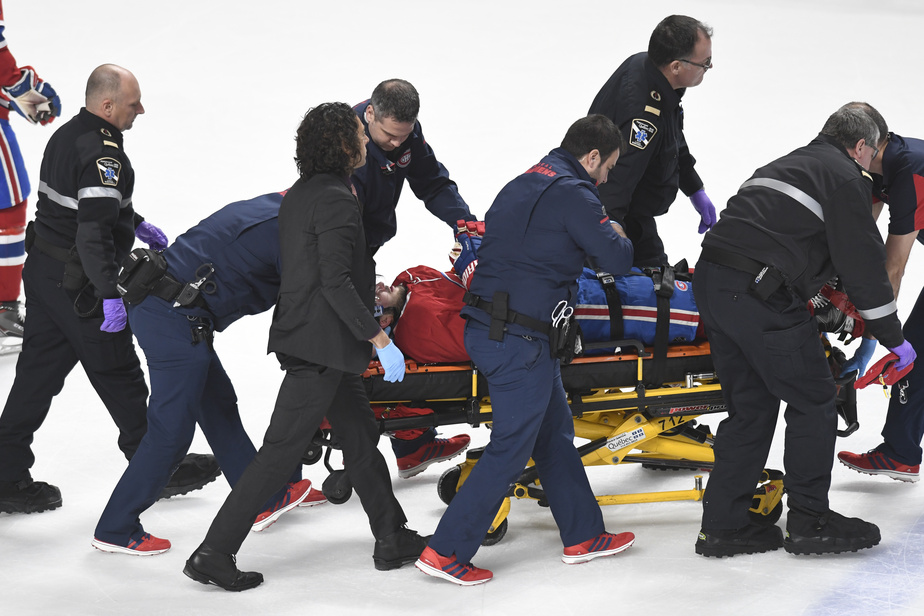 Ice is thin for team medics

On November 17, the Hockey 911 event will take place, organized by the Montreal General Hospital Foundation and the Canadian. The initiative is free, but the public is invited to make donations to support critical care at the Montreal General Hospital. The discussions – virtual – will have as a theme “Playoff emergencies”. Canadiens head coach Claude Julien, associate coach Kirk Muller, as well as Dr David Mulder and the Dr Dan Deckelbaum will attend, and they agreed to speak to us on the sidelines of the event.

Let’s go back to 1986. The Montreal metro has just inaugurated its fourth and last line. Halley’s comet waves to Earth before departing for another 75 years. Glass Tiger is a hit in the charts.

On the ice, the Canadian and the Flames compete for the Stanley Cup in the final. On May 24, the Habs hold a 3-1 lead in the series and prepare to play in Game 5. Chris Nilan was left out with an ankle injury, however, but insisted on playing the game. The Dr David Mulder doesn’t want to hear anything.

“I worked very hard to convince him not to play, because of the risks, recalls the Dr Mulder, Canadian chief medical officer, on the phone. He was very reluctant and at the time, I thought he would never speak to me again! But today, we laugh about it.

The players think they are invincible. We often have difficult discussions when they have a concussion. Very often they have to be protected from themselves.

Doctors who work for sports teams are placed in a difficult situation.

On the one hand, they deal with patients – the players – who want to play at all costs, for a set of factors: bravery, the simple passion to play, solidarity with teammates or the financial stakes linked to their performances.

On the other hand, they are paid by teams that aim to win championships, which ideally implies that the best players are in uniform.

In the middle of that, their tenure, that the Dr Mulder, from the height of his 55 years of experience with the Habs, sums it up as follows: “When he was general manager, Serge [Savard] always said to me: I don’t want the players to come back a game earlier than necessary, but I also don’t want them to miss one more game! ”

And in the words of his deputy, the Dr Dan Deckelbaum: “You have to think about the rest of the season, but also about the series and the years to come, recalls the Dr Deckelbaum. It’s always the player’s health that counts. The idea is that if you give the player enough time to heal well, then they can perform better. “

That said, the D’s version of eventsrs Mulder and Deckelbaum is not the reality of all professional sport. In recent years, there have been numerous examples that have shown that the very nature of the system can put pressure on stakeholders.

“By definition, we are always the least well placed to determine our own conflicts of interest, because we do not have all our objectivity,” recalls Emmanuelle Marceau, specialist in questions of medical ethics and associate professor in the department of medicine. social and preventive program of the School of Public Health of the University of Montreal (ESPUM).

“A conflict of interest is when our judgment is biased, or when there is an appearance of conflict. The notion of appearance is as serious as a conflict, because it undermines confidence in this service. This is why conflicts must be declared and managed. ”

In 2016, a Harvard University study on the NFL recommended that doctors no longer report directly to teams, and that said doctors be chosen by a neutral committee, made up of representatives of the teams and the Players’ Association. We understand the idea: limit the direct links between doctors and teams.

In hockey, concussion management has notably resulted in the hiring of independent assessors, who are responsible for ordering that a player be assessed for a concussion if it is determined that a streak has caused it. put at risk.

“There is no simple answer that applies to all cases, recalls Mme Marceau. But when there is an employment relationship, whether it is a doctor or another professional, there are obligations that come with it, such as loyalty. This can create situations where the professional is less independent than if he were a consultant. “

In Le Canadien, as in many teams, however, the doctors are affiliated with hospitals and the team is therefore not their only source of income. They have the status of consultant.

“The fact that a doctor is affiliated with a hospital is healthy as it is dynamic,” says Mme Marceau. It brings greater autonomy. He is less vulnerable to pressures than there might be because he has other commitments. But when it is his only livelihood, he may be hesitant. ”

That said, the close ties between doctors and teams have their benefits, whatever one thinks about conflict of interest issues. The main advantage: a long-term relationship between doctor and patients. “That’s why we have family doctors! », Says Emmanuelle Marceau.

“You know very well their antecedents, their medical records, pleads the D.r Deckelbaum. People respond to treatments differently. When you administer treatment, you are not just treating an illness; you are also treating a patient, whom you should know. “

“It’s a long-term relationship, built on trust,” adds Kirk Muller, associate coach with the Canadiens, who was head coach in Carolina.

In our environment, there is pressure, injuries play a big role and you need quick answers on the plan to follow in the short and long term. You need to be sure that the doctor understands what is best for the player.

This long relationship between an organization and a doctor also helps to manage the many gray areas, as the coach can step in and support the specialist’s message.

“If the doctor tells me that the player can not play, there is no question that he plays, assures Claude Julien. If the player is reluctant, I get involved. I don’t want to risk his career. No one wants to be responsible for the end of their career! But if the player can tolerate the pain, if he can play without risk, that falls in my backyard. It’s up to me to chat with the player to see if he wants to play. “

For Kirk Muller, the change in culture also means that there are fewer problematic situations. This is because in addition to the potential for pressure coming from the organization, there was also that of peers.

“When I was playing, the pressure mostly came from the players themselves. There was pressure from teammates [peer pressure] to play injured, says Muller. Today everyone is better informed and better understands the long term implications of injuries. Decisions are made with full knowledge of the facts. Players know that such an injury, if you do not treat it properly, can harm you in the long run. ”

With 10 goals and 7 assists in 20 games, Kirk Muller was at the heart of the last Stanley Cup conquest, in 1993. He did so with a good boost from the Dr Mulder… “From my very first appearance in the first game against the Nordiques, Mike Ricci gave me a good legal check. It tore the ligaments in my collarbone. It was quite painful! The Dr Mulder gave me an injection to freeze me before each game. Who would have thought we were going to continue for four rounds? launches the old number 11, laughing. But he couldn’t give me injections every day, so the day after a game, I had to let my shoulder thaw. Those days, I couldn’t raise my arms. My children came to see me, I told them: I’m sorry, daddy can’t take you! It healed over the weeks, even while playing. But the more we advanced in the playoffs, the more players there were in the therapy room. The Dr Mulder is amazing, he’s a legend. “

Where are the feminists?

In the name of inclusion and social justice, the new trend is to welcome transgender …