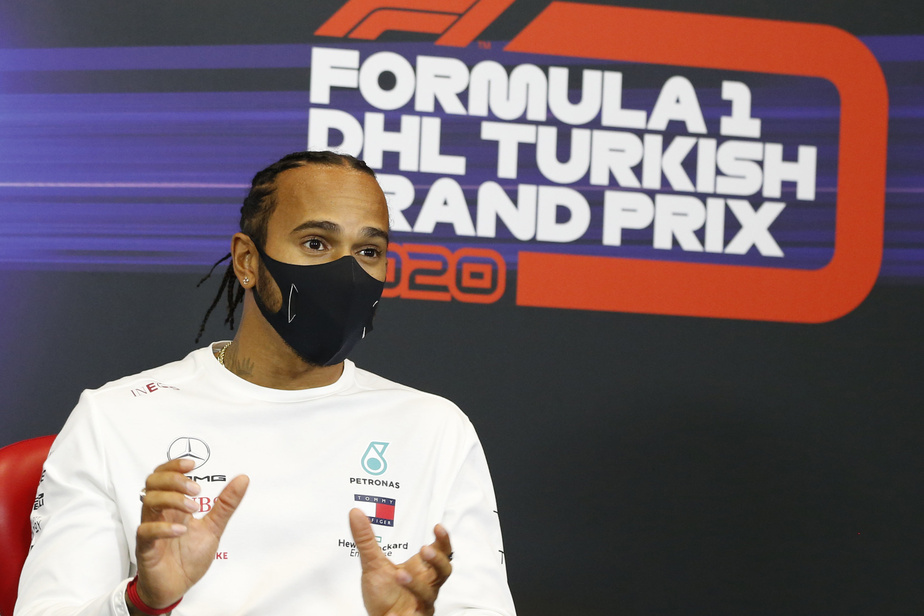 (Istanbul) A new record at the wheel: Lewis Hamilton (Mercedes) has a first chance to equal the seven world titles of the German Michael Schumacher at the F1 Turkish Grand Prix on Sunday at the Istanbul Park circuit .

“Winning the race is always the goal. Over the years, I have learned not to add unnecessary pressure. There are four GPs left, no need to bet everything over a weekend, ”he explains.

“Perhaps that’s why, moreover, it is sometimes a shock. It just falls on you and you don’t really know how to feel or what to say. ”

I would be incredibly proud to match an icon like Michael. But what matters most to me is the message it would send: that we must dream bigger and not let anyone say that it is not possible.

Before the 14e race (out of 17), the Mercedes driver has 85 points more than his runner-up and team-mate Valtteri Bottas, his last rival for the coronation. To secure the crown, he must keep 78 points ahead after the race (26 per GP remaining).

Hamilton will therefore be champion if he finishes ahead of Bottas. To prevent it, the Finn must score at least eight points more than him. He has only beaten him three times this season.

The lights are therefore green for the star of Formula 1 to equal a new record for legend Schumacher, after having beaten that of victories (93 against 91), podiums (162 against 155) and pole positions (97 against 68 ).

“We try to do the best possible job without thinking too much about the points, but, of course, I try to delay his coronation as much as possible”, promises anyway Bottas.

This week or the following, Mercedes, for its part, is promised to a 7e driver’s title in a row since 2014, which will be added to the 7the crown of the constructors capped consecutively during the previous round.

What further consolidates the Silver Arrows in their position as the most rewarded team in the history of F1 over a given period. Better than Ferrari in the Schumacher years (five drivers ‘titles and six constructors’ titles between 1999 and 2004)!

Istanbul Park (like Mugello, Nürburgring, Portimao and Imola earlier in the season) was not on the initial 2020 calendar. The pandemic has orchestrated the reunion, behind closed doors, between the premier class of motorsport and a circuit she visited seven times between 2005 and 2011.

“F1 is coming back to Turkey for the first time in nine years, which means we will face a number of unknowns again at the start of the weekend,” recalls Mercedes boss Toto Wolff.

While a large part of the grid will discover the route in free practice on Friday, some of its big names have stood out there in the past: Hamilton in 2010, the German Sebastian Vettel in 2011 and the Finnish Kimi Räikkönen in 2005.

Those who have practiced this 5.378 km circuit and its 14 bends (including the famous N.8, a long sloping curve to the left that the F1 should take at around 270 km / h) will all tell you the same thing.

“It’s going very fast. […] It’s very physical and our necks will remember it at the end of the weekend ”, due to the significant forces suffered by the drivers, warns the Mexican Sergio Pérez (Racing Point). But, adds Vettel (Ferrari), “those who have never been here before will immediately appreciate it”.

Share
Previous Wearing the N95 mask: a union turns to the Superior Court
Next Pandemic: longer Christmas holidays for students?