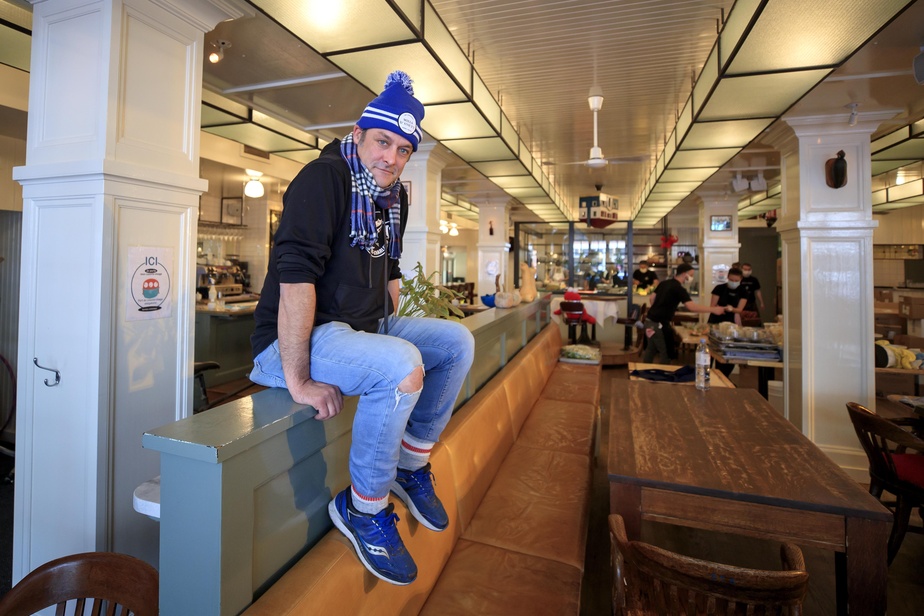 The documentary Pandemic leader follows Chief Charles-Antoine Crête for seven months, who gives a rudder to the Montreal Plaza ship to keep it afloat during the storm caused by the COVID-19 virus. Immersion in a fragmented universe, but organized on the fly, where survival is not an option, but an obligation.

It was the directors Marie-Philippe Gilbert and Van Rokyo who approached Charles-Antoine Crête and his partner, Cheryl Johnson, as the pandemic was just starting to take hold in early March. Until September, they followed in his daily life, without make-up or staging, the chef of the Montreal Plaza and all those who revolve around him.

“At the beginning, we had no producer, no broadcaster. We started it by telling ourselves if it gives anything, so much the better, if not, well, it will make us memories ”, tells a Charles-Antoine Crête always talkative when we meet him on a hot day in early November in his restaurant. now transformed into a counter-grocery store-boutique-sandwich shop, to which has just been added a store devoted to Miel d’Anicet products, which we see in the documentary.

Produced by Annie Bourbeau and Urbania, Pandemic leader will premiere this Wednesday evening on Télé-Québec. For about fifty minutes, we see the extraordinary efforts made by Crête, Johnson, their tightly woven team and their close guard (with a funny flash appearance from Ritalin, the restaurant’s bear mascot), in order to find solutions to the closing restaurant rooms and “reinventing” their babies, a word that is widely used these days, but which is part of its DNA, notes the chef who has not, it should be said, tongue in his pocket.

“We had to invent something, a business in our business. Yes there is the takeout, but there are a lot of other things that we have developed and advanced. For once, we had time! Me, the people who went to the chalet for three months, I did not understand them. You are therefore well caves! The mess is caught, now is the time to act! “, Launches the one who has had only seven days of vacation since last March.

We go through a war, and we see who is standing. We cannot abdicate; it’s not even a question of money or business anymore, it’s a question of pride.

For the colorful character, there is no question of facing the crisis with stagnation, or naively hoping that things will turn around. Moreover, this is how he approached these upheavals: by asking his team to imagine the future taking for granted that the restaurant would never return to its previous form.

“It doesn’t tempt me to be depressed. I hate the negative world! People ask me these days what the future of gastronomy is. Beyond the crisis, I think restaurateurs need to question themselves, not just get on their knees hoping people will come and spend their money. You have to be better managers, build better teams. ”

A restaurant that closes is not just employees losing their livelihood; they are stocks to be managed in order to minimize losses, artisans and producers who find themselves without customers to sell their products and crops to, and restaurateurs who are under enormous pressure.

By intimately following a chef in constant movement, usually talking on the phone, earpiece in ear, pacing up and down a Plaza St-Hubert disfigured by construction, the documentary shows how the latter, armed with a will and a resistance that seem inexhaustible, quickly transformed his restaurant, notably by creating in one day a new grocery store in his former office. “It doesn’t sound like much, but I’m very organized, because I like being crazy all the time. One is conditional on the other. ”

“It’s circular; if we roll, we can buy from producers; we have reduced all our staff to almost 90% of their salaries with takeout we push, he continues. To be honest, it would be about the same as sitting at home, doing nothing, but I prefer to be on the move, because that’s where things happen. ”

But what the documentary shows above all else is the commitment Crête has to the humans around him, who make him feel good, his partner and his team at the forefront. “We closed on March 13; on the morning of the 14th, everyone was present. People were there to save the house they live in. ”

If there is one lesson to be learned from all this, it is that we have to transform ourselves into a society that is not individualistic. This is what we were already doing and people sometimes find that we are crazy and that we give a lot, but we were perhaps right all this time.

We also see him doing everything to not only transform his business, but also reach out to producers and artisans to help them through this bad patch, a question notably addressed with an emotional Normand Laprise, with whom he worked for 15 years. au Toqué!, who fears seeing all the work of a lifetime – and the close links he has forged with local artisans – disappear in smoke.

“Normand and I talk to each other almost every day. My old girlfriend called us grannies. We are the most unlikely duo! How do we endure, how he endures me, I don’t know. But we really became a family. And that’s what is most important. ”

Pandemic leader will be broadcast this Wednesday evening, at 8 p.m., on Télé-Québec, and will then be accessible in free catch-up on the web.

A mobile game for Squeeze

Adopted in 210 countries and territories, Ed, the famous ostrich dad from the series Cracked, …