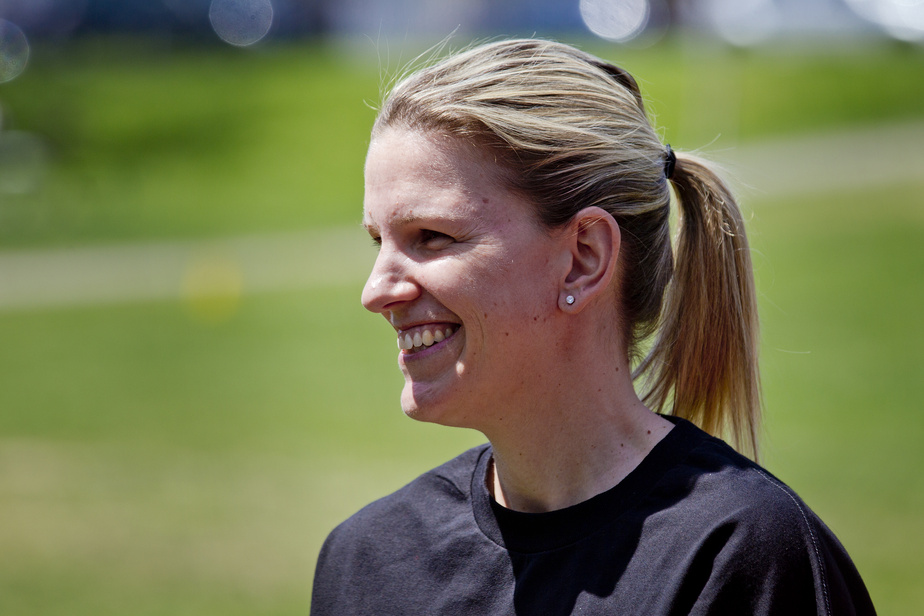 The former goalkeeper is one of the 15 finalists of MAMMOUTH 2020.
When Kim St-Pierre recounts his Olympic exploits to a young audience, the looks are sometimes questioning. Because it is not uncommon that in 2002, 2006 and even 2010, the audience before her was simply not born.

The surprise was therefore real when we told the former goalkeeper that she had been selected among the 15 finalists of MAMMOUTH 2020, an event organized by Télé-Québec to salute the personalities who most inspired teenagers in the over the past year.

It is obviously St-Pierre’s induction into the Hockey Hall of Fame last summer that we want to highlight here.

Nominees come from all walks of life, from Dr Horacio Arruda to singer Elisapie through youtuber and influencer Alicia Moffet. Other representatives of the Quebec sports scene include the athlete and activist Woody Belfort as well as the founder of the organization Pour 3 Points, Fabrice Vil. And a certain footballer by the name of Laurent Duvernay-Tardif.

The public is now invited to vote for their favorite of 2020, and the identity of the lucky winner will be revealed in December.

“It’s very flattering! exclaimed the Olympian earlier this week. In these times of COVID, young people need a lot of inspiration and motivation, so to be on this list is a great privilege for me. ”

She says she is delighted that her consecration among the greats of hockey has touched young people so much. Suddenly, we rewards once again the “adversity” that she had to face to get there as well as the perseverance that was necessary for her.

Kim St-Pierre also sees it as a nice nod to Quebec women’s hockey, which finds an increased resonance within the younger generation, for whom “recognition of success” largely takes precedence over gender differentiation.

“When I grew up, my role models were only male, whereas today girls and boys grow up having great female role models,” she greets. Also citing the example of cultural diversity, the three-time Olympic medalist believes that “children make less of a difference, they are much more open”. “It’s part of their reality,” she adds.

Young voters have until Sunday to show their support for their favorite personalities for the MAMMOUTH 2020 evening.

Kim St-Pierre points out herself: Now is an excellent time to talk to children and adolescents about her passion for physical activity and sport.

Like many Quebeckers, she was disappointed to learn that the government’s containment measures, which paralyze most of organized sport in the province, were extended for another month in the red zone. She wholeheartedly hopes that access to sports facilities and infrastructure will be reopened “as soon as possible”.

I grew up in the sports world, so if I put myself in the shoes of young people, I would find it difficult to find motivation at this time.

“Young people, especially in high school, really need sports,” she insists. The team atmosphere, the support, the friends: it brings so much more than just wins and losses! I wish them it comes back soon. ”

“My husband and I are very athletic, so we manage to get our children moving, but not all families have the time or the opportunity. ”

It is here that she mentions that Boks Canada, a non-profit organization she has been employed by for four years, offers free “lots of resources” online for families looking for ideas to keep their children active, whether or not they are confined.

The organization, headed by the manufacturer of sporting goods Reebok, primarily offers tools intended for schools to promote daily physical activity among students and their teachers. COVID-19 requires, the work is now done remotely.

Kim St-Pierre is responsible for covering Quebec to promote Boks, which gives him additional opportunities to talk to young people about his career and his passion for sport, in order to “inspire them to move and to want to accomplish great things. things “.

For inspiration, MAMMOUTH 2020 confirms it: it can say mission accomplished.

Share
Previous The non-country of Françoise and Manon
Next Kim Thúy, The end of innocence

In Quebec, when it comes to snowmobiling, we cannot ignore the name of Denis Lavoie, …