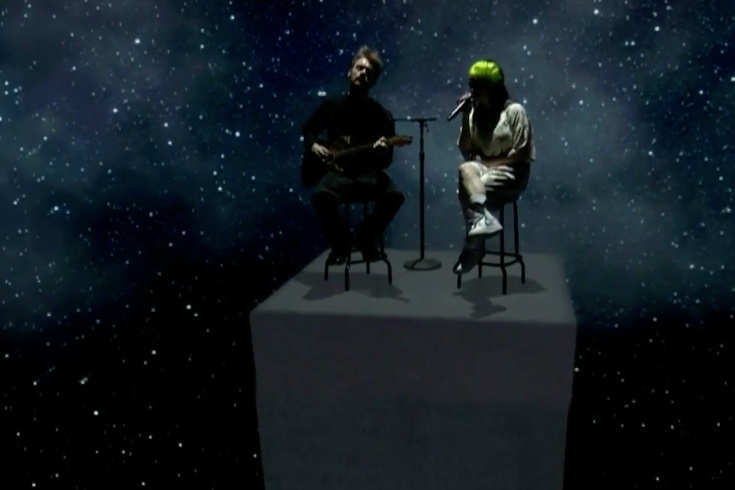 Where Do We Go? The Livestream | Create something never seen before with Moment Factory

Singer Billie Eilish presented a virtual concert last Saturday that far surpassed, in terms of production, the multiple online shows presented since the start of the pandemic. Using special effects, three-dimensional sets and immersive visuals, the artist allowed his admirers to travel through his sinister and crazy world for an hour. Among those Billie Eilish can thank for this success: Montreal studio Moment Factory, which participated in the visual development of the project.

Saturday night, live from Los Angeles, Billie Eilish sang underwater. She also performed a song standing on a narrow tower, her feet facing the void. She danced with giant spiders around her. And she took advantage of a stage where space constraints no longer seemed to apply, the depth created virtually giving her an infinite playing surface.

His secret? Extended reality (XR) visual content, where the real world and the virtual world interact, for a musical and graphic immersion in a limitless universe.

For several weeks, Moment Factory employees were part of the design team for this universe for the show. Where Do We Go? The Livestream. The multimedia studio was already engaged in the tour of Billie Eilish, which was interrupted due to the pandemic.

She and her team had prepared a great tour for the fans, but seeing that COVID-19 was not going to last just a few months, they wanted to find out how to reach people. they have decided to follow the trend of online services.

But Billie Eilish had no intention of doing like everyone else. That’s why she was surrounded by scenes of forest fires, then found herself on the ocean floor during her performance ofAll The Good Girls Go To Hell. Also for that she and her brother, Finneas, were perched on a huge monolith to I love you, which she sang in a forest, then in the dark.

Thus, the Montreal box was hired to lead the creation of this ambitious project. “There is the visual content, but also a lot of technical and staging considerations. Our Creative Director, Tarik Mikou, was involved at all levels regarding Billie’s performance, ”explains Daniel Jean.

Both in terms of artistic direction, lighting effects and visual effects content, the company has taken on the role that many internationally renowned artists have already given it since its founding (including Jay-Z, Arcade Fire , Childish Gambino, Ed Sheeran and Céline Dion).

This time, on the other hand, the stake of an online and live broadcast of a show between the real and the virtual brought all kinds of new factors with which they had to juggle. “Technologically, it was a huge learning curve,” says Daniel Jean. We knew that this technology existed […], we saw performances of two, three songs. But a full 55-minute show was unheard of. ”

On site, it was necessary to understand how the studio and the technology attached to it worked so that Moment Factory could then bring its expertise in visual creation.

[Sur le plan créatif], you have to approach it in a completely different way. You have to put yourself in the shoes of the spectator who will be in front of his screen. You have to think about every angle of view with the cameras.

At the beginning and at the end of the performance, the spectators could see the artifice: the studio and the small stage, simple and without real decoration, on which were Eilish, his brother Finneas and his drummer, Andrew Marshall. We could see how the incredible images that were released, once the magic of augmented reality had kicked in, had nothing to do with the premise.

“The most grandiose spectacle possible”

Several elements of this exclusive performance were borrowed from the show put on for Billie Eilish’s tour, such as certain aesthetics of the song. Bad guy as well as the famous giant (and terrifying) spider. “We adapted it to the video afterwards,” explains the producer of Moment Factory. This is not obvious. In an arena, there is depth, people around, light that can pierce the space. We don’t have that luxury when people are looking at their screens, so we put a lot of emphasis on the depth effects, behind, below and in front of Billie and her musicians. That was the great added value. ”

The live broadcast created “a very high level of risk”. “Live, anything can happen. It only takes one bug and it’s a domino effect, “said Daniel Jean, adding that during the performance, the whole team was” on the edge of [sa] chair “.

In the end, everything went very well. Better yet, the show was a hit, both on the side of critics and admirers of the singer. Billie Eilish’s universe is very particular, exhilarating, delirious and overflowing with creativity. His audience has high expectations, and the performance was absolutely up to par. “Everyone worked with a single goal: to produce the most grandiose spectacle possible,” says Daniel Jean.

“We are very satisfied, very blessed and honored to collaborate with such a talented artist,” he concludes. We emerge inspired and grown from this experience. ”

The Moodys in Montreal