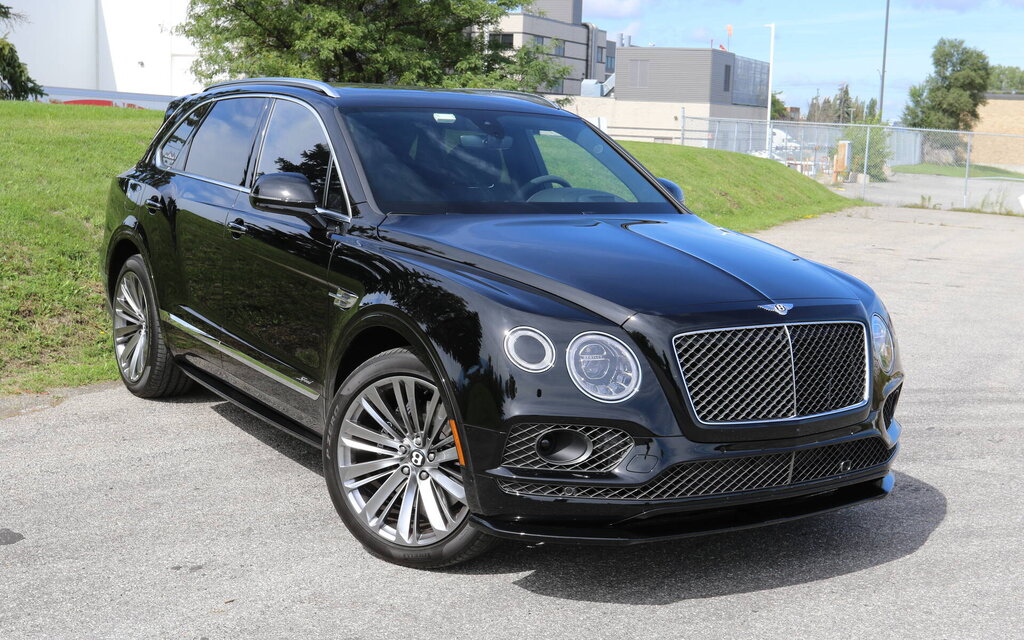 Bentley Bentayga 2020: waiting for the next one

Like other manufacturers of luxury vehicles, it was obvious to Bentley: an SUV was necessary to meet demand. With a GT coupe, a convertible, a large statutory sedan and a sport utility, the British manufacturer can now meet all the demands of its customers.

Our test model, a Bentayga Speed, is powered by a 6-liter W12, but a V8 and a hybrid version are also available in the lineup. This 12-cylinder offers similar power and torque (626 hp and 664 lb-ft) to the other models in the range since this unit is found under the hood of the Continental GT and Flying Spur. It is mated to an 8-speed dual-clutch automatic transmission.

The Bentayga is placed in a price range substantially similar to that of other Bentley models. Our test model was equipped with a black “Beluga” paint, as well as a black interior of the same name, embellished with carbon fiber inserts.

Sportier than a Flying Spur

When we got behind the wheel of the Bentayga, we had just stepped off the Flying Spur. The interior of this Speed ​​version was sportier than the classic and chic ambience of the large sedan. But as you can imagine, the quality of finish remains high level. On the other hand, we must recognize that the multimedia system, a little simple in its display and its controls, betrays the age of the design of the model. A defect that will be corrected for the new vintage (see below).

Thanks to its larger interior space, the Bentayga obviously benefits from greater versatility, as well as a larger trunk than a Flying Spur. On the other hand, the comfort of the seats was slightly worse on board the SUV. Rest assured, we go from excellent to very good, which remains quite acceptable.

On the road, the Bentayga’s ride is a little firmer, more sport-like than the rest of the range. The atmosphere is a little less padded than on board the Flying Spur, the suspensions are a little firmer (everything being relative) and the rolling noises a little more present. On the other hand, although it is rather heavy (2,508 kg empty) it manages to deal well with this high mass. The direction, sharp and precise, gives complete satisfaction while the efficiency of handling is surprising for a juggernaut of this size.

While one would have expected a shifty front end and handling inferior to that of a Flying Spur because of its higher center of gravity, the Bentayga surprises with its balance and high dynamic capacities. It will also surprise the rest of the traffic around you thanks to the impressive acceleration of the W12.

With a 0 to 100 km / h speeding in 3.9 seconds, amazing pickups and a top speed of 306 km / h, you never miss a pedal at the wheel of the big Bentley SUV. Fortunately, the braking was sufficiently well dimensioned and effectively slows down the machine.

The current model dating from 2017, a new version of the Bentayga arrives for the 2021 vintage. The aesthetic changes are numerous on the exterior, in particular the front part which adopts the aesthetic codes already adopted by the Continental GT and the Flying Spur. Same thing at the rear where we find the oval lights borrowed from the Continental GT.

But it is on the inside that the change is truly dramatic. The interior, deeply revised, is also inspired by other models in the range and further enhances the quality of presentation. The dashboard has been redesigned and a modernized multimedia system is introduced. We haven’t been able to drive it yet, but a showroom model was in the Montreal Bentley dealership’s showroom when we visited. And strength and recognize that the interior is even more polished and inviting than the model we drove.

Announced as quieter and more refined, we will have to wait a little longer before being able to get behind the wheel of this new version.

A big thank you to the Decarie Motors dealership for lending their 2020 Bentley Bentayga Speed.

www.guideautoweb.com
Share
Previous Canada, one of the countries with the fewest conspirators
Next Demonstration against wearing a mask: “It’s beyond me”, says Valérie Plante