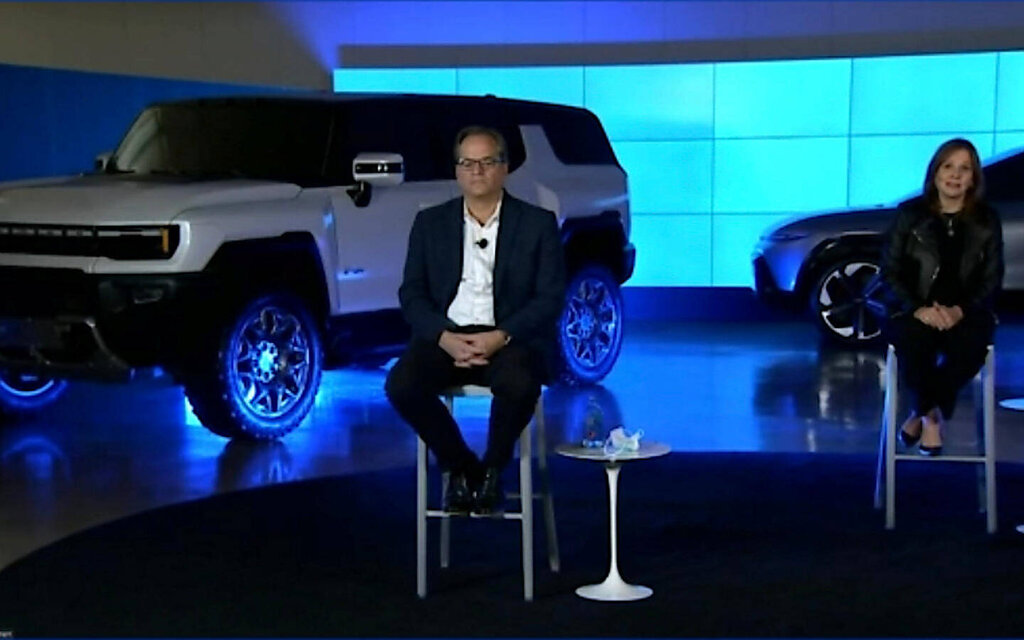 During its presentation at the Barclays World Automotive Conference held virtually this Thursday, General Motors took the opportunity to make several important announcements regarding the development and marketing of its electric vehicles.

Board chair and CEO Mary Barra appeared alongside Doug Parks, executive vice president of product development and supply chain, but two other distinguished guests captured attention. Indeed, behind them on the stage, we saw for the first time the all-new GMC Hummer EV in SUV format as well as a prototype of the future electric pickup truck from Chevrolet.

Unfortunately, no specific details on these two new models have been given.

Remember that the Hummer EV was unveiled on October 20 in a light truck version, but that GM has always planned to offer it also in an SUV configuration. The official launch of the latter may take place in the coming weeks given this surprise appearance, but it is impossible to know the exact date.

The design is obviously very similar and we can naturally expect to find the same characteristics as an engine deploying up to 1000 horsepower and offering approximately 560 kilometers of autonomy, a four-wheel directional system (which allows diagonal movements). like a crab) and several cameras around the vehicle.

The MultiPro tailgate will of course be replaced by a conventional SUV tailgate, but one wonders what will happen to the removable roof. Separately, GM has yet to say whether there will be two or three rows of seats. Production is expected to begin in 2022, shortly after the Hummer pickup.

As for the electric pickup truck from Chevrolet, its design respects certain brand codes while taking greater freedom. Unsurprisingly, the grille at the front is closed and the silhouette is more futuristic than that of a Silverado.

It is indeed a full-size model and one can expect an exceptional autonomy. Indeed, one of the announcements made by GM yesterday is that the maximum range of its new Ultium battery has been revised upwards, from 645 to 725 kilometers with a full recharge.

Here again, the date of the unveiling remains a mystery, but we know that this truck is one of a dozen GM electric vehicles whose development has just been accelerated. To be continued!

Share
Previous COVID-19: Chapais and Chibougamau in the red from Monday
Next Flight attendants request priority for vaccines