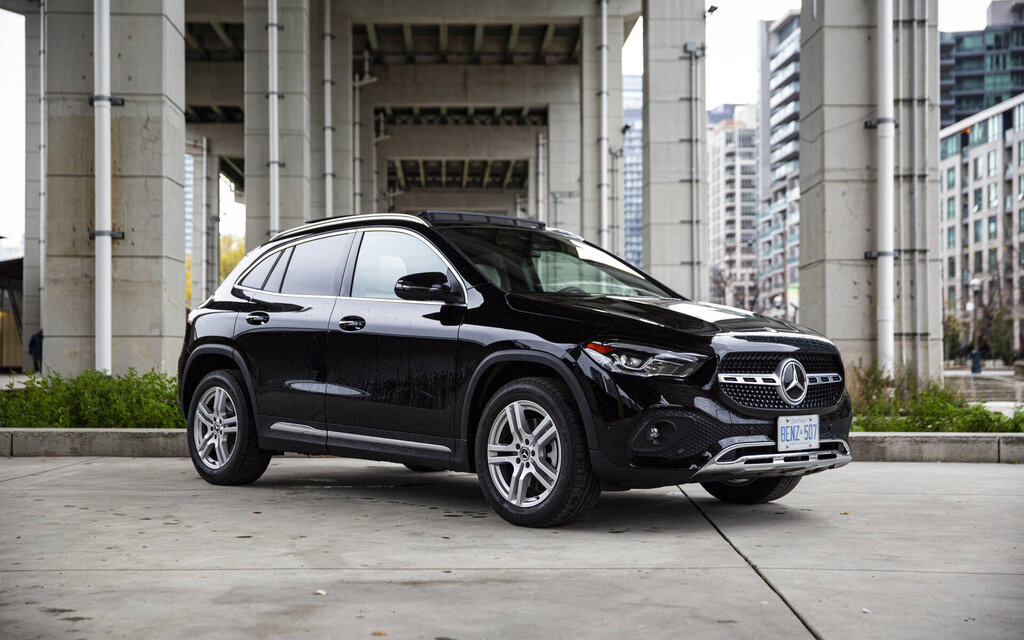 When it arrived on the market in 2014, the Mercedes-Benz GLA looked like a bipolar vehicle, insofar as it was not really an SUV and not really a wagon according to the codes specific to these two configurations.

But for the new generation GLA, which is currently showing up in dealerships across the country, the SUV identity is now much more assertive.

Built on the same H247 platform as the compact CLA coupe-like sedan and the new GLB SUV, the GLA now takes its place as an entry-level model with three variants, the GLA 250 4Matic and the GLA 35 AMG 4Matic, while the GLA 45 AMG 4Matic will follow later.

The least that can be said is that SUVs are raining at Mercedes-Benz, where the range becomes bloated, and that a certain fratricidal fight could take place, the segmentation between the GLA, the GLB and the GLC becoming very fine on several aspects, including the price. As an example, a GLC, which is a more substantial vehicle, costs about $ 6,000 more than a GLA.

This evolution of SUVs is expressed above all by the style, more distinctive, and the size of the GLA whose exterior dimensions are increased, except for the length which is substantially the same as that of the previous model, while the wheelbase has also progressed.

This extended wheelbase allows more clearance in the rear seats. In addition, the GLA is fitted as standard with rails allowing the second row seats to slide, either forward to prioritize cargo space or rearward to increase the space available for passengers. . Brilliant.

Lots of equipment, but optional …

Like the A-Class as well as the CLA and other models of the brand, the interior of the GLA gives pride of place to digital with the MBUX interface with screen and touchpad.

However, it should be noted that the two screens supplied as standard on all GLA variants, that is to say the one replacing the instrument cluster and the one used for the multimedia system, only measure 7 inches, which must be found in the catalog of options and choose the Premium package to get the two 10.25-inch screens.

This brings us to tell you about the very long list of optional equipment offered on the GLA. So, to be able to benefit from several advanced security systems, it will be necessary to spend more. Ditto for the Navigation package, which however includes an augmented reality feature inaugurated on the recent S-Class, as well as for the display device.

In addition, if the customer wants to be able to pair their cell phone and use the Apple CarPlay and Android Auto features, they must purchase the Premium package, mentioned earlier, at a cost of $ 3,600. While several manufacturers offer these features at no cost, Mercedes-Benz integrates them into a group of equipment sold as optional at a high price …

No wonder 99% of buyers buy the Premium Package, it’s the only way to get Apple CarPlay!

All of this makes it almost impossible to find a base GLA at the floor price of $ 42,400, and it takes several thousand dollars more to drive a well-equipped vehicle. Moreover, with the full range of optional equipment, the cost of a GLA 250 4Matic can exceed $ 50,000. The price range for a GLA 35 AMG 4Matic ranges from 52,900 to over $ 60,000, depending on options.

At the wheel of the GLA 250 4Matic, you quickly realize that the road behavior is really that of a front-wheel drive vehicle since the torque distribution is 80% on the front and 20% on the rear when the driving modes Eco and Comfort are selected, while it is 70/30 in Sport mode.

In short, in terms of dynamics and performance, it’s very honest, but the GLA does not stand out particularly from the crowd and is more reassuring than player. On certain stretches of road in poor condition, the filtering of the ground connections turned out to be rather dry, which conversely affects comfort.

The engine sound has been altered on the GLA 35 AMG and this vocal signature helps express the enhanced performance potential of this variant. On a course made up almost exclusively of highways and secondary roads, we observed an average of 8.7 L / 100 km at the wheel of the GLA 250 and 9.7 with the GLA 35 AMG, the eight-speed automatic transmission, very effective, allowing to improve consumption.

Finally, the second-generation GLA displays the SUV look that is popular today, and its more spacious interior, as well as its sliding rear seats, make it a more versatile vehicle than the previous model. As is often the case with the star brand models, it takes several thousand dollars extra to get a well-equipped vehicle.

www.guideautoweb.com
Share
Previous A fast lane for government assistance requests
Next Increase in retail sales in Quebec and across the country