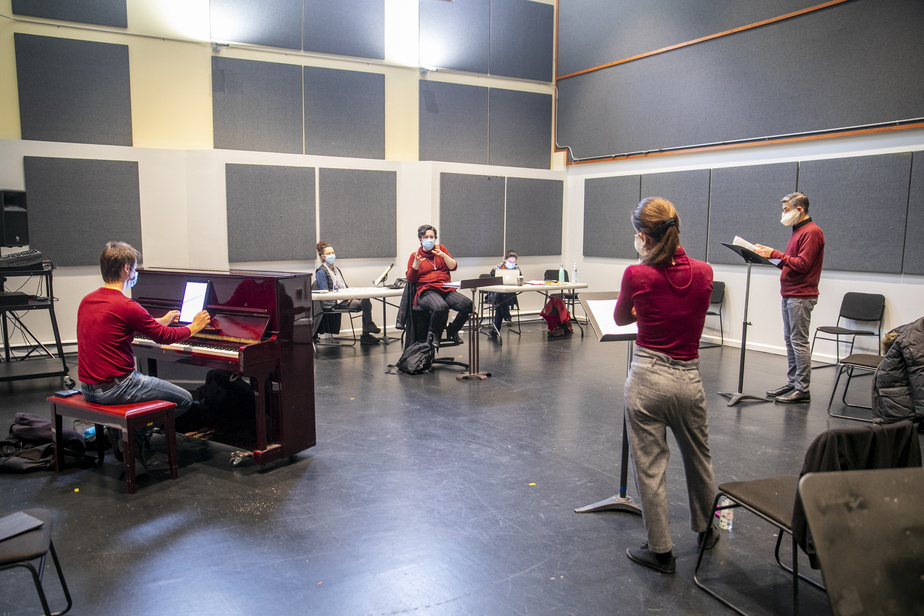 As One | Hannah, a trans heroine at the opera

In the midst of an awareness week for trans realities, the Orchester Classique de Montréal (OCM) will offer, this Friday, a virtual performance ofAs One, an opera on gender transition.

Premiered at the Brooklyn Academy of Music in 2014, before being performed in nearly 40 cities around the world, the production does its worth. First in terms of media and artistic representation of trans and non-binary people. “I saw several members of the audience connect with the main character, feeling like they were being represented on stage for the first time,” says American filmmaker and librettist Kimberly Reed, who was inspired by her own transition.

The designer also observed the effect of her story on cisgender viewers (those whose identity matches the gender assigned at birth). “I saw people who had never really thought about what trans people’s experiences looked like to take an interest in this for the first time,” she adds. It is extremely powerful to see a feeling of empathy appear in them. I think the music paves the way for that to happen. ”

Through the main character, Hannah, she wanted to evoke the ups and downs of her experience. “It’s probably lighter than people expect,” she says. We often hear stories about trans people in pain, but not everyone. Of course, there is resistance around Hannah and people who don’t understand her, but at the end of the day opera is more about her journey to understanding and accepting herself. “

Written in collaboration with Mark Campbell, As One is a mixture of fact and fiction. “The foundation is autobiographical, but the more we advanced, the more we wanted to cast a wide net. Our goal was not to pretend our story tells the story of all trans people, but to reach a large audience. ”

CMO Director General Tarash Kulish was blown away by what he heard during an Opera America conference, an event during which excerpts from new operas were presented, in 2016. “I found that the marriage between the words and the music was perfect, which is rare in contemporary works, says the one who has been an opera singer for almost 20 years. In addition, it is a 75-minute work on a very topical subject, with a very accessible treatment. ”

While taking a direct interest in trans realities, As One recounts in a comprehensive way the journey of a character who discovers and takes responsibility.

It goes as much for a heterosexual, homosexual or trans person. Each of us goes through self-acceptance, so it’s a universal story. Having said that, being a member of the LGBTQ + community myself, I did not understand T for trans very well. Seeing the opera gave me a better understanding of the emotions and what goes on in the mind of a trans person.

Baritone Phillip Addis and mezzo-soprano Sarah Bissonnette share Hannah’s character interpretation, before and after her transition. “We focus on a person and his life, in several aspects of his life, with a little humor through it all,” explains the singer. I think everyone can relate to the concept of getting to know yourself. In adolescence or later in life, we all make discoveries about ourselves. “

Press met her during rehearsals where she had to wear a special mask designed for opera singers. “I feel like I’m trying to find my tune, but that doesn’t change the accuracy of my voice. Most of the work is hearing the note before you make it. Either way, we don’t have the choice to adapt. ”

The performance will be offered live this Friday at 7:30 p.m. and filmed by four HD cameras. “The singers won’t be able to touch each other or be very close,” says Kulish. They will work more with the cameras. It’s a lot of challenges, but we are proud to say that we present something and that we hire artists. If we stop, it will be fatal for them and for cultural organizations. ”

Thanks to virtual broadcasting, the show will be able to reach curious people from all over the world. One wonders, however, if opera lovers, who often have the reputation of being relatively conservative, are ready for a work on trans realities.

It’s clear that we clear new territory while playing As One at the Opera.

Kimberly Reed, opera co-author As One

The director of the CMO is nevertheless convinced that opera enthusiasts are increasingly open to new realities. “For 10 years, we have felt a great interest in new repertoire,” says Tarash Kulish. You can’t just play Puccini and Mozart. You have to move, change, adapt. And the public follows! Especially the Montreal public. I have sung in several cities in Canada, and I believe that the people here are particularly open to the new repertoire. “

Sarah Bissonnette recalls that the year 2020 opened the door to several important societal reflections, including those on the representation of marginalized groups. “We are there,” she says. It is no longer acceptable not to be open-minded towards the person next to you. People want to understand and feel more involved in this. Some find it hard to ask the right questions, but sometimes you can learn to become a better ally through an opera, before digging deeper afterwards. ”

After the performance, Montreal transgender actress Tranna Wintour will host a panel discussion.

> Consult the opera’s web page As One

Share
Previous The Christmas bet
Next COVID-19 in France: the peak of the second wave has undoubtedly been crossed