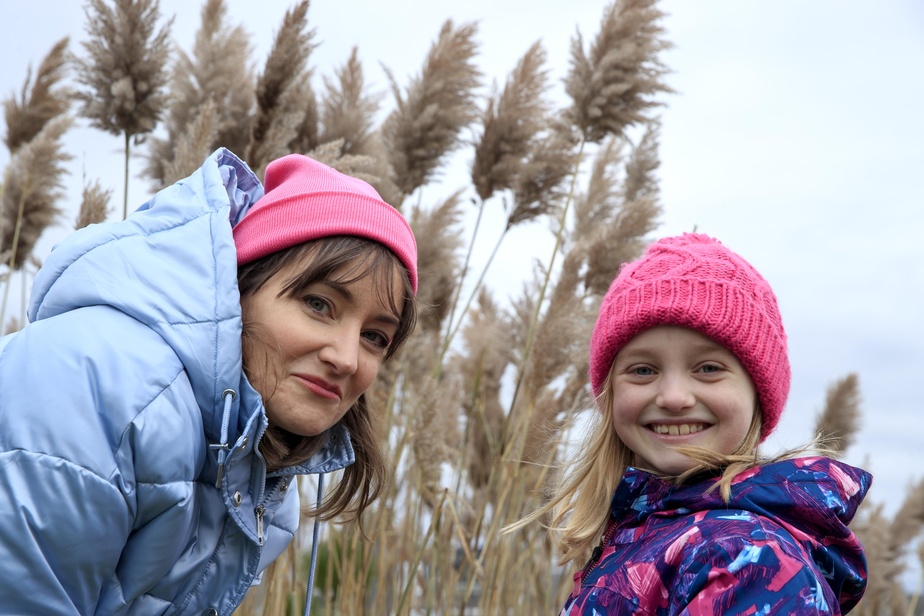 Maryse Letarte and Stella: to sing together at Christmas

“O sleigh in the sky, don’t forget the essential: full of love at Christmas”, sings Maryse Letarte in her album Footsteps in the snow, published in 2008. Truer than ever, these words are repeated in My Christmas rhymes to listen to, one of the two record books that the musician offers to children, in collaboration with her daughter Stella Letarte-Macdonald, 9 years old. Interview in four stages, like the four weeks of Advent.

My Christmas rhymes to listen to features 10 holiday songs – they’re not really nursery rhymes, rather Christmas classics embellished by Maryse Letarte’s soft and clear voice. There are also four compositions by the musician that have become classics (a feat!), Such as Boom boom, The parade and O sleigh in the sky.

These pieces have been reworked for an audience of children – and parents, we can rest assured. “For example, in Boom boom, I added bells, tubular bells [carillon tubulaire] and I shortened it, ”says Maryse Letarte. A graduate of the Grove School of Music in Los Angeles, the musician signs the arrangements and the production of the two albums (their digital version is offered with the purchase of the book-disc).

Extract from an unknown opera by Jacques Offenbach

My fantastic nursery rhymes to listen to brings together 10 famous tunes, which evoke unicorns, fairies and magic formulas. Maryse Letarte, in charge of song selection, herself translated the lyrics of Humpty Dumpty, of The Sleeping Beauty and the American rhyme All The Pretty Little Horses, become Pegasus and unicorns.

More surprisingly, Maryse Letarte offers with The song of the elves the first recording on disc of the original French version of this extract from the opera The fairies of the Rhine by Jacques Offenbach. Presented in the XIXe century, this romantic opera would have been booed by an audience sent by a competitor of Offenbach. Subsequently, the composer kept the music of Song of the Elves and laid new words there. It has become La Barcarolle (“Beautiful night, O night of love”), which everyone recognizes the air. “It fascinates me to see that composers at the time were faced with the same thing as today”, observes Maryse Letarte.

Several rooms, including My Christmas Tree, are performed in a duet with his daughter Stella, 9 years old. The blonde collaborates in the collection My nursery rhymes to listen to since he was 5 years old.

“At first, it was spontaneous,” explains Maryse Letarte. I would take bits of what she sang and put them in the songs, technology permitting. Today, Stella understands the rhythm, she really sings. It’s fun doing this together. I have difficulty making photo albums, I am running out of time. It makes me souvenir albums of his voice. ”

Extract of My Christmas Tree

“When the sincere light shines at the end of the tunnel”

While you have to give up several holiday rituals (a gift from the pandemic), taking refuge in the Christmas tunes is good. “What is certain is that music is essential for me, observes Maryse Letarte. When illness strikes a loved one, it is not the time to say: “Find the positive side of the situation”. But when you’re safe, healthy, you have to be able to see how lucky you are. ”

“In my songs, I always say to put the emphasis on love at Christmas, not on shopping,” she continues. This is even more true this year. Often, we will transpose into actions what we are not able to say to our loved ones. There, there are no more braces, no more beaks on the cheeks. I have the impression that we are going to be forced to force ourselves to say things. ”

In 2020, Maryse Letarte would obviously not rewrite the passage from Boom boom where it evokes “the end of a blessed year”. We would prefer to sing these words of The parade : ” When the sincere light shines at the end of the tunnel, merry, merry Christmas! ”

Auzou offers listeners other volumes of My nursery rhymes to listen to a link to download the songs that were on CD, on his Facebook page.

The Crown series criticized for its “partiality” towards Charles and Diana

“Completely partial”, “slander”, “vitriolic attack” against Prince Charles: the last season of the series The …