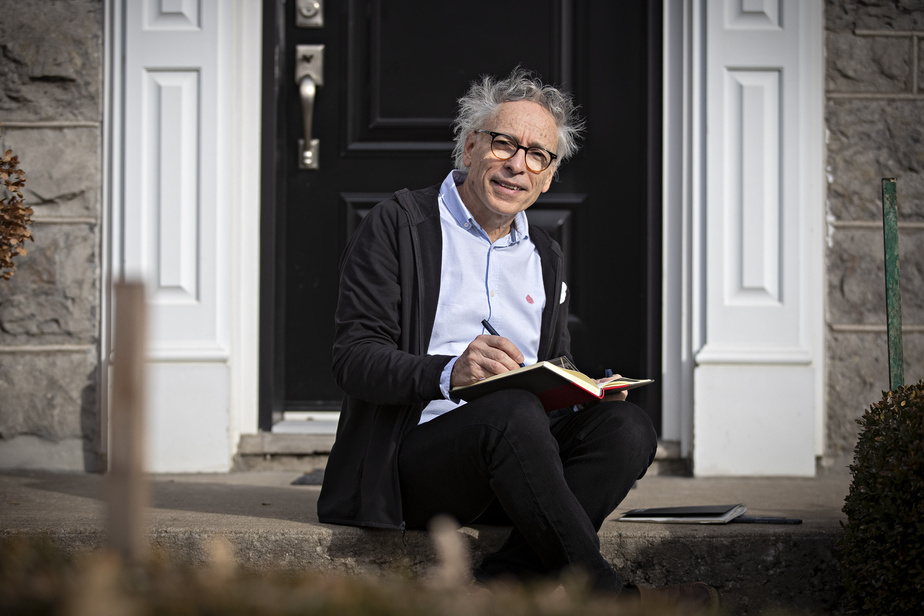 The stars, by Jacques Goldstyn, on Friday won the TD prize for “the most remarkable French-language children’s book in Canada”. Known to generations of Quebecers for his drawings in The Resourceful, the author and illustrator is also in the running for the 2021 Astrid-Lindgren Prize, the world’s largest in children’s literature. He just launched Knitting, published in La Pastèque. Interview in five stitches, like so many stitches in the place and in the purl.

Jacques Goldstyn was born in 1958, in a village in Saguenay – Lac-Saint-Jean. Her mother was Breton and her father a Parisian Jew. He has already won the TD award in 2016, for The Arbragan. Win this time for The stars, who tells with humor and humanity the bond that is woven between two children of different religions, is precious to him.

“This award means something to me, because it is two children who become friends when everything separates them,” says Jacques Goldstyn. They will fall in love and have children. This is what is wonderful: love triumphs over everything. We can see, at the moment, what is happening on the planet. We see what happened in France. We see the terrorist acts caused by fanatics, fundamentalists. We are asking for more army, more coercion. In fact, it would take more love. ” In The stars, in addition to love, “reason triumphs,” argues the geologist by training. It is their common passion for the stars, the planets, the distant galaxies that unites these children ”.

Released on November 12, his new book, Knitting, was suggested to her by a friend. “She said to me: ‘I would imagine a book on knitting, with a grandmother and her granddaughter going to dig into the past.’ ”

Jacques Goldstyn thought of his mother, who knitted. “When she was young, my mother kept the cows on the farm,” he says. She was bored. My grandmother said to her: ‟You will learn to knit, but first, you will learn to unravel.” »Unravel? It is literally recovering wool from old knits to reuse it, a practice light years away from today’s fleeting fashion. “My mother used to say: ‘A lost minute is a lost life’, Jacques Goldstyn remembers with a laugh. She was always doing something. If it wasn’t cooking, it was sewing or knitting. ”

Go through a life

A scene shows little Madeleine, wearing her grandmother’s scarf in a city center. “I wanted to illustrate the simplicity of knitting, which was done by hand, compared to the megalopolis where people are in a hurry, where they no longer have time to knit, so they buy things”, explains Jacques Goldstyn. Weird words like “korkidu” can be seen in stores and advertising posters. “Korkidu, it’s become a mania, I put it everywhere”, laughs the illustrator. What does that mean? “Black dog shit”, an expletive in Breton!

Jacques Goldstyn uses watercolors, wood pencils and India ink to create his illustrations, always full of life. “I like doing something by hand,” he observes. To have an original board and not be able to edit it. If I make a sky, I have to start my drawing again if I miss the color. At one point, it becomes a bit like acrobatic work. ”

The affront to the pretentious

Aware of being privileged to be able to work from home, Jacques Goldstyn is little affected by the pandemic, which makes him think all the same. “As a geologist, what is important to me is the passage of time,” he observes. The Earth is 5 billion years old, but the presence ofHomo sapiens is believed to date only about 300,000 years ago. And the writing, a little over 5000 years old …

“By putting things in perspective, we realize that the human presence on the planet is really little,” says Jacques Goldstyn. We are very pretentious to want to impose our way of doing things on all life on the planet. It’s funny to see that a little bug, a little virus, manages to put us back in place a little, despite everything we can invent as a machine, as an atomic bomb, etc. In the end, we are very few things… ”

Knitting. Text and illustrations by Jacques Goldstyn. The editions of La Pastèque. From 5 years old.

“Santa has to die”: When it comes to killing Christmas…