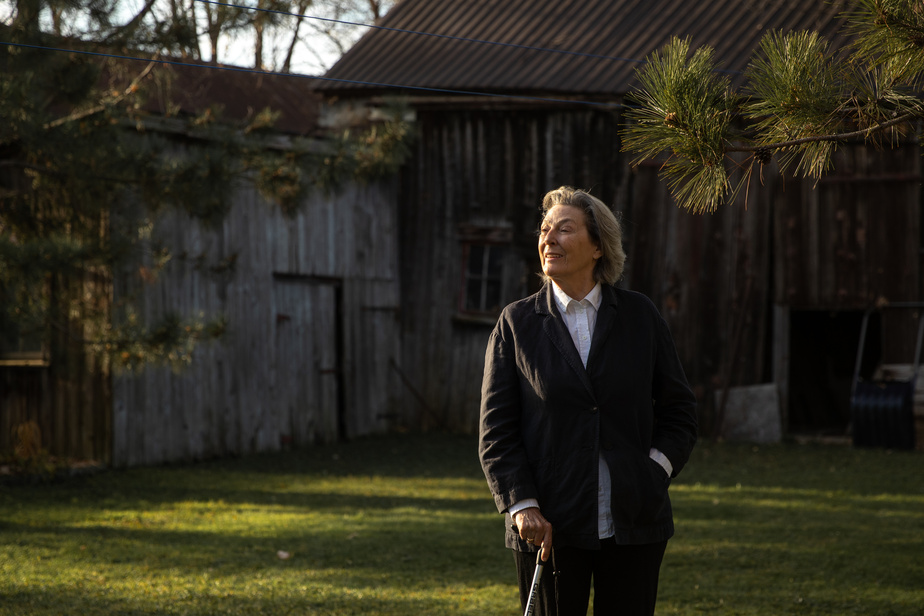 Actress, filmmaker, painter, writer… Paule Baillargeon is an accomplished artist despite a career full of pitfalls. We understand better why by reading A mother, collage from his diary, followed by texts by Thirty paintings, his autobiographical film made during a residency at the NFB in 2009. A mother, is the story of a painful relationship with a difficult woman who was not available for her children. A relationship which marked Paule Baillargeon with a hot iron, and which she recounts in this moving text.

(Saint-Charles-sur-Richelieu) Paule Baillargeon is waiting for us, sitting under a tree, in the garden of her lover’s house. It is there, on the banks of the Richelieu River, that she now lives. When she gets up for the photoshoot, she moves around with a cane. The filmmaker is suffering from oculopharyngeal muscular dystrophy, a degenerative disease of genetic origin which, she reassures us, does not cause her any pain, only inconvenience.

It’s a magnificent day in November and Paule Baillargeon still has the same sparkling eyes and that absolutely bright smile. The contrast between this apparent gentleness and the violence of his story is all the more striking. Because while reading A mother, we discover that the life of this woman was marked by mental and physical suffering, by a lack.

The impossibility of a relationship

In A mother, which is in fact the diary she kept at the beginning of the 2000s, Paule Baillargeon spits her anger and her despair on the paper. “My mother was a mystery to me until the end,” she says. When these pages were written, she was at the end of her life. I went back to see her again and again, I tried to make peace, to understand her. I wrote this because it had to come out. ”

“This” is a text filled with violence and disappointment. The story of the old age of a woman who refuses to waste away, interspersed with childhood memories not at all happy. The story of mourning a mother-daughter relationship because the mother is emotionally absent.

She did the right thing: meals, running the house, etc. But she couldn’t see us.

In a pivotal scene of this short story, the mother decrees that little Paule has no talent for drawing. This episode will cut off his wings, literally. “From a very young age, I wanted to be an artist,” admits Paule Baillargeon. It was inside me, it was very powerful. I became an actress because it’s pretty much the only thing available to a girl, actress or singer. Then I made films, I drew, I wrote. I dabbled in everything, but I didn’t dig. I think I would have been a great painter if I had devoted myself to it seriously. It suited my temper better. That’s why I find it so terrible, what happened to me with my mother. In my childhood mind, something terrible happened. ”

A body that speaks

While reading A mother, we also learn that Paule Baillargeon experienced this maternal abandonment in her body, a sort of somatization that made her sick throughout her life. Struggling with severe migraines that kept her in bed for several days, she could barely function.

My headaches started around the age of 10, 12, and in my 30s and 40s, the migraines turned hellish. I have always had poor health. I was too sensitive, everything hurt me.

Through it all, her mother has remained a mystery. “She was a woman full of vitality who was surrounded by friends, wonderful women,” says her daughter. But she was probably frustrated. Then sexuality, what was it at that time? So she made her children pay. And her husband. From my father, with whom I had a great relationship, because he liked music a lot, she only spoke badly to me all the time. ”

Paule Baillargeon has never kept a private diary, except during these few years when her aging mother needed her children more than ever. Who were there, despite everything. A situation filled with contradictory emotions – sense of duty, guilt – which will resonate with those who are confronted with the old age of a parent with whom the relationship has not been a long quiet river. “My brother took more care of my mother than I did,” explains Paule Baillargeon. But I was going to see her anyway. In a way, I was probably trying to come to terms with her. In the end, she was deaf and had macular degeneration. My brother used to say: “She’s been deaf and blind to us all her life, and in the end she really became…” ”

This story is obviously a key to understanding the artistic career of Paule Baillargeon, marked by a strong voice.

Moreover, in the eyes of some, she will always remain the filmmaker of The red kitchen, feminist film that still raises eyebrows today.

“Nobody digested it,” says Paule Baillargeon, laughing. It threw me on the sidelines forever. I was in my early thirties when it came out, and it stalked me. Wherever I go, they bring me back to this movie. It was very radical. I “was” very radical. And for a woman, it didn’t work. »After The red kitchen, Paule Baillargeon has never again obtained funding from Telefilm and SODEC.

It took the Albert-Tessier Prize, awarded by the Quebec government in 2009, to appease Paule Baillargeon. “All my life, I had the feeling of being invisible because I was invisible to my mother,” she admits. I carried that with me, in my art. I was apart, in the margin. When I was told that I was going to receive the Quebec Prize, I did not believe it. I said to myself: “My God, do I exist?” It’s just a price, but it’s a price that came at the right time. It healed something. Even if, in my opinion, my work comes down to only three films: Anastasie Oh my darling, The red kitchen and Thirty paintings… I had something to say and to pass on as an artist. And I wanted to say it absolutely. But I will always have the impression that I haven’t said it enough… ”