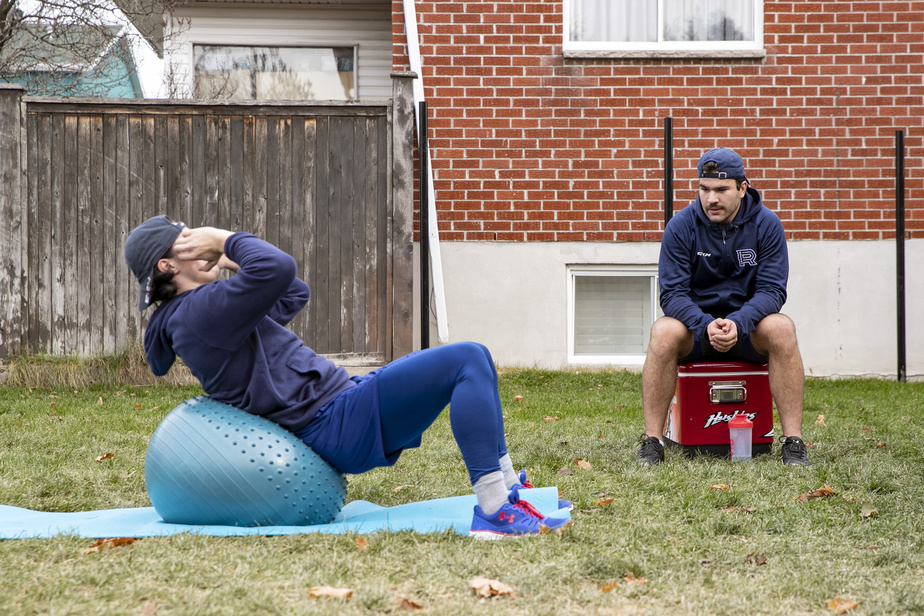 The backyard in the absence of the gymnasium

Make good heart against bad luck. The expression perfectly sums up what Joël Teasdale and Rafaël Harvey-Pinard are doing in order to keep in shape while the training centers are closed.

Let’s sum up. In a world without a pandemic, the two young men would have played for the Laval Rocket this season. The gymnasium, access to the ice rink: everything would have been managed by the team.

In a world with a pandemic, well… American League hockey won’t resume until February 5th. And the two players are basically taken at home, like all of us.

The house for Teasdale is a duplex in Blainville, which he took over last summer. The house for Harvey-Pinard was actually his parents’ house in Arvida. But in September, following the recommendation of Laval Rocket head coach Joël Bouchard, Harvey-Pinard moved to Blainville. Very close to Teasdale, precisely.

It is not a coincidence. They were teammates for two years in a row for the QMJHL team in the Canada-Russia series. Then, in the middle of the 2018-2019 season, Teasdale was traded to the Rouyn-Noranda Huskies, the Harvey-Pinard team. A few months later, they lifted the Memorial Cup together.

“It quickly clicked with him during the Canada-Russia series,” explains Teasdale, in an interview with The Press. When I was traded to Rouyn, he became a good friend of mine. It’s fun to have him with me! ”

As they are neighbors, as Teasdale has space in his yard and as Harvey-Pinard does not have any, the two accomplices train together. Red zone obliges, the gymnasium where they usually exercise, the Center Performe Plus, is closed.

In the red zone, there is a certain vagueness in the rules. “Only individual or duo activities (while respecting the required distance) and individual training will be allowed,” writes the Government of Quebec. This gray zone did not exist however during the first confinement, in March and April, when it was everyone at home.

In the spring it was quite different. I had zero equipment and no access to a courtyard, because I lived in an apartment. There wasn’t a lot of room! At the moment, we can still train outside.

“And in the spring, the only person I trained with was my girlfriend. It’s not to be boring, but it wasn’t the same challenge! She’s in good shape, but not as good as me! With Rafaël, it gives me good motivation. ”

With the means at hand

Both forwards are at the start of their careers. Harvey-Pinard has in his pocket a simple one-year contract with the American League, where the minimum wage is US $ 51,000. Contract that he has not yet started to sell. And Teasdale, meanwhile, signed a three-year rookie deal that earns him $ 70,000 a season when he plays in the American League.

So forget the image of the hockey player with the triple garage and everything that comes with it. Forget brand new workout gear, too.

“Me, for the gym, I do not have much equipment,” admitted Harvey-Pinard by videoconference this week.

We went looking for material here and there. We have a stationary bike, we have weights. My girlfriend had them, Joël’s aunt too. We bought a ball, some rugs.

“I asked for 50lb and 35lb weights as a gift from my sponsor. Rafaël brought 25 lbs from the Saguenay. I bought a roulette wheel to do the sit-ups. The stationary bike, they lent it to me. We were resourceful. At first, I was looking on the internet, but it’s really not cheap! With the gyms closed, there are people who take advantage of it and increase the prices. ”

Off-ice training is all the more important as Teasdale hasn’t played a single game since May 2019, as a knee injury caused him to miss the entire last season. In addition, access to ice rinks is complicated in the red zone. Harvey-Pinard, for example, said he put on the skates three times a week, each time for individual work.

For the program, chance does things well. Teasdale’s personal fitness trainer is Stefano Lanni, who is also the Rocket’s fitness coordinator. So Lanni left him a plan to carry out at home.

“The first week, the first month, I had nothing. It was difficult to work hard, it was much more cardio than muscular, summarizes Harvey-Pinard. But there, I can work the muscles and gain mass.

“We still train hard even if we have limited equipment. We don’t have a lot of equipment, but we have what is needed. It’s better than having nothing! ”

Supported by loyal partners: even in a pandemic, the Rouge et Or is active!

As COVID-19 forces Rouge et Or teams to take a break, the organization is working …