“I messed up” – Nikita Scherbak

“He has incredible skills and an unparalleled sense of hockey. He has a lot of flair and we project that he will be able to play on one of the first two lines. He has a lot of talent, a lot of character and a good personality. He plays a more North American style. ”

“We like what we saw of him on the ice. All the information we have gathered during the season supports him as a very good team-mate. His coaches loved him and he has a great personality. He is a passionate young man who wants to play in Montreal. ”

These words were those of the Canadian recruiting director, Trevor Timmins, a few minutes after the selection of Russian forward Nikita Scherbak in the first round (26th overall) of the 2014 draft.

At the time, Timmins’ enthusiasm could be explained. His new prospect had come off an excellent campaign in the Junior Western League, where he had an offensive record of 82 points in 65 games. It was only five points lower than a certain Brayden Point (who was also 18 that year).

Except that six years later, the scenario imagined by Timmins is far from having materialized. Very far even.

After three years in the organization of the CH and having only played 29 games with the big club during this period, Scherbak was placed on waivers by the team in 2018. He only scored five goals and two assists in the match. ‘blue, white and red uniform. Statistics that are far from being those of a top-6 winger …

As part of a generous interview with TVASports.ca, Nikita Scherbak agreed to look back on his tumultuous time in Montreal. Showing great humility, the former no. 38 of the CH took the blame. 100%. And word of the young man, the end of his association with the Habs hurt him much more than one might think …

“I was not expecting that at all!”

Nikita Scherbak remembers the day of June 28, 2014 very well. It was on that day that he became a Montreal Canadian.

“How to forget it?”, Launches first the sympathetic skater.

“I was completely in shock. I didn’t expect to be drafted in the first round at all. I hoped so, but I didn’t believe it so much, to be honest. There are so many good players available and so few chairs in the first round … I was really surprised to hear my name ringing that day.

“I had met Marc Bergevin and Trevor Timmins in a hotel room a few days before the selection round, but nothing gave me any indication that I was ultimately going to be their choice.”

“Being drafted by Montreal, a team with such a rich history, was unimaginable. I was literally speechless. I often think back to that day and it makes me smile. ”

Asked whether he had, in the days following the draft, discussions with the leaders of the CH regarding his game and expectations for him, Scherbak replied this.

“They didn’t really tell me what their expectations were. But they drafted me for a reason. I am a skilled hockey player who could bring a good dose of talent to the team. That’s what they believed at the time. ”

“I had my chance”

Transparent, Nikita Scherbak admits to having often thought about the reasons which led to his departure from Montreal.

Used sometimes regularly, sometimes sporadically, the right winger finally never found his niche within the group of attackers of Sainte-Flanelle.

Does he think he had a real chance to show off?

“Absolutely. I had my chance. People were hoping to see more from me and you know what? Me too! I haven’t been consistent enough to dislodge someone. I would really like to go back and change the way I approached this chapter of my life, but I can’t. ”

“I don’t want to hide and blame someone else. I messed up and it doesn’t concern anyone other than me. I should have given more. Of course, all the fans in Montreal would have liked me to become a David Pastrnak. But there are so many factors to consider when considering a career … “

In July 2019, Scherbak had made a lot of talk about him for very harsh remarks he had made against the organization of the Canadian during an interview with the Russian media Sport 24.

In an article that had been picked up everywhere in Montreal, we could read that the young man seemed very bitter about his association with the Habs. He criticized in particular the attitude that Michel Therrien and Marc Bergevin had towards him.

However, it seems that Scherbak did not use comments as raw as those which were published a year ago.

“This interview came back to haunt me a lot, to be honest. I think my words were exaggerated to some extent. Yes, there are some things that have been said. I do not hide it. But I spoke under the influence of emotion and I also regret many of my comments. “

“Today, as I speak to you, I absolutely want to tell you that I still place the Canadian at the top of the most prestigious teams in the NHL. And by far. Players and families are treated excessively well. ”

The Russian also says that his relationship with Marc Bergevin has always been good.

“We always got along well. I have always been honest with him and I believe he always was with me. I was treated well by Marc. From the first to the last day. Being part of this team has been a real honor. ”

On December 2, 2018, Scherbak, waived a few days earlier by the CH, was claimed by the Los Angeles Kings. If he says he was flattered by this mark of confidence from the Californian training, the Russian also admits that he took a long time to accept his failure with the Habs.

“I went through a very difficult period after my stay in Montreal. It’s such a fantastic organization … People recognize you in the streets, then you come to Los Angeles where no one knows who you are. It was very different. ”

The forward had nevertheless started well his stay in “LA”, when he scored on his first pitch in the black and white uniform. But things took a turn for the worse afterwards, so much so that he didn’t blacken the scoresheet in the next seven matches.

“After a good first game with the Kings, everything changed. I was sent to the American League. At that point, I was really mentally exhausted. I then made the decision to leave for the KHL. I had received a good offer and the opportunity to play with a good team presented itself. ”

But his stay in Russia did not go as planned.

The Avangard d’Omsk put the name of Scherbak on waiver a few weeks after the start of their association, then the skater signed up with the Traktor of Chelyabinsk. But Scherbak did not see fit to accept the club’s qualifying offer at the end of the last campaign. He is thus without a contract at present.

Nikita Scherbak, it is quite obvious, is not very proud of his last years in the world of professional hockey. However, that does not prevent it from being accomplished on other levels.

Very recently, his girlfriend, who is from Quebec, gave birth to their first child (a little boy). The couple has been living in a Montreal residence for a few months and is very happy there. This is another proof of Scherbak’s attachment to the metropolis.

“Being a dad is amazing! I am enormously grateful to life for allowing me to have such an adventure. Being able to raise your child is undoubtedly one of the most beautiful mandates in the world! For now, I’m very happy to be able to spend time with the people I love. ”

The young dad is satisfied, but does not twiddle his thumbs so far.

“I have a gym at home and I must tell you that I am currently in the best shape of my life.”

Scherbak confides in the same breath that he maintains the goal of returning to the National Hockey League next season. His agent is also very active at present.

“He is currently in contact with various teams in the NHL and discussions are well underway. Playing in the NHL remains a dream for me and always will be. There are several leagues around the world, but the National Hockey League is the best and that’s where I want to play. I believe I can do it on a regular basis. ”

www.journaldequebec.com
Share
Previous Nearly $ 1.6 billion to help workers and businesses
Next [VIDÉO] More than 200 people in a bar: the Microdistillery denies the allegations of the Sherbrooke police officers 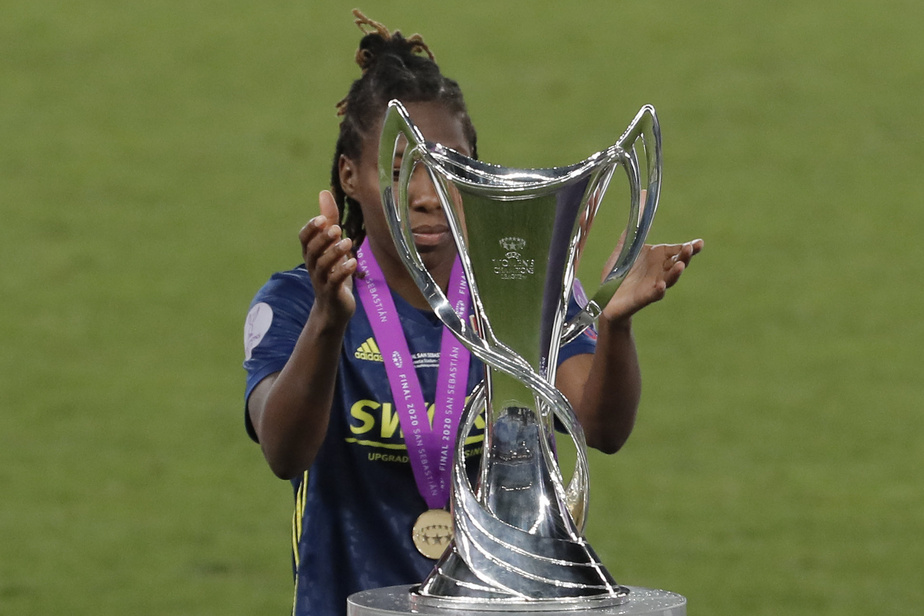 Soccer | Kadeisha Buchanan is Canada’s Player of the Year

Olympique Lyonnais defender Kadeisha Buchanan, who won the Champions League for the fourth time in …