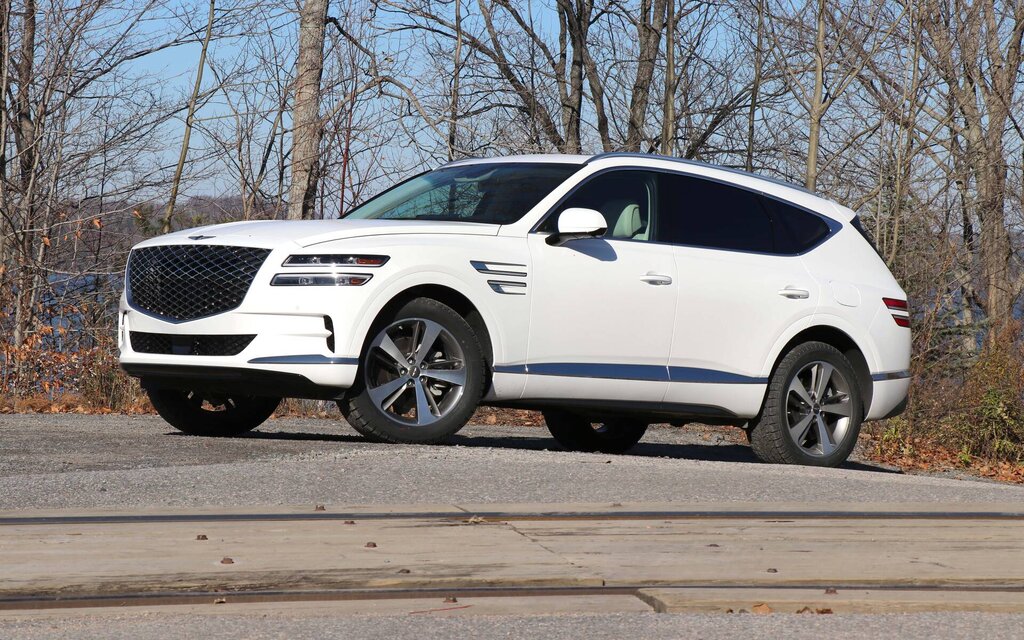 There was a not-so-distant time when every SUV that hit the market was sure to have some success. We owe to several of them the survival or rebirth of a brand, as well as the changes in customer perception of an emblem that had lost its feather.

Now that the market is well established, things are going a different way. Some SUVs are real business failures, while others disappoint bitterly. Think for example of the Jaguar E-Pace, the Ford Ecosport as well as the Cadillac XT6. Products at the bottom of the segment and that customers shun, because the offers are now very numerous.

Aware of this situation, Genesis therefore arrives with a first SUV, the GV80. A vehicle which is located in the lucrative niche of luxury intermediaries (Acura MDX, BMW X5, Mercedes-Benz GLE, etc…). Popular and of capital importance for the manufacturers offering products there, this segment has no less than fifteen models, which excludes electric alternatives.

For Genesis, the goal is hardly to surpass the leaders. Firstly, because it is obvious that convincing buyers of European products is a long-term exercise, but also because we want to offer personalized service, surrounded by a product of great value. Clearly, there is no question of liquidating models like Cadillac or Infiniti, thus affecting the brand image and the value of the product. The GV80 thus constitutes the alternative to a German product, using in a way a strategy reminiscent of that of Lexus, in its infancy.

That said, we have to admit that the GV80 is quite eye-catching. And this time, there is no question of dipping into Hyundai’s toolbox to give birth to a variant of a mass-market model. For example, no Ford Edge dressed in a Lincoln Nautilus on Sunday. Everything here is authentically Genesis.

Listening to the customer

Because you have to start somewhere, Genesis had so far entrusted the mandate of sales and service to Hyundai dealerships. We had also set up a few shops, sometimes temporary, just to test the market. However, the nebulous exercise proved to the strategists of the brand that the business model used for decades still and always suited a large part of the clientele. Thus, Genesis announced this week its intention to establish gracious shops, sometimes annexed to Hyundai dealerships, sometimes not. Places with all the looks of a concession comparable to those of major luxury brands, with the difference that inventories are directly managed by Genesis Canada. And for good reason, an optimal choice for the customer, resulting in faster delivery.

Obviously, Genesis also offers the possibility of an online transaction with home delivery, which has already made its reputation. A formula which, you will agree, has taken on its full meaning in recent months. Added to this is the valet parking service for vehicle maintenance, which is included for the entire five-year warranty period. In short, at Genesis, the customer is king and master. And because horror stories are still multiplying on the side of well-known prestige brands, the Korean manufacturer intends to do well.

The GV80 has an entry price of $ 64,500, which you can push up to $ 85,000 with the most opulent of models. That said, Genesis convinces straight away with a product that offers a lot for the price. Certainly more than the majority of its rivals, for whom the options are as numerous as necessary. Because here, the only option you might have is a choice of shades, at no extra charge. Even freight and delivery charges are non-existent at Genesis, being included in the overall price.

Now, if this adds to the long list of advantages of this product, you still have to want to tame it. And on this account, the strategists of the brand admit it: the GV80 will not be aesthetically pleasing to everyone. Either we like it or not.

But for now, know right away that if you are not the chrome type, you better forget about it. Rims, ornaments, sill moldings, window sills, lettering, side gills and roof rails. So many elements that dazzle the eye, without forgetting the imposing grille with diamond mesh, which also plays the card of sparkling chrome. When will we see a “black set” version playing a formula similar to that of the Acura “A-Spec” and Audi “S-Line”? Patience… tell us the people of Genesis.

One thing is certain, the impeccable exterior finish contributes to enhancing the image of a luxury product. Interestingly, only the rims make it possible to distinguish the versions aesthetically. With a dimension of 19 inches on the Select version, they increase to 20 inches on the Advanced version, then to 22 inches (yes yes!) On models equipped with the V6 engine.

Literally sumptuous, the interior is squarely inspired by those of Bentley products. With stitched and diamond patterned leather, with beautiful woodwork and with an eye for detail that can be found even in the design of the switches. Then, in the evening, the occupants are impressed by this mood lighting which frankly dazzles the eyes.

We should also add that the tactile impression of the various elements exudes quality, adding to the already exceptional sensory experience. But above all, it is difficult not to highlight the efforts made by designers relating to the marriage of colors. Indeed, a choice of five color combinations is offered, the most ostentatious being olive green on walnut brown. So unusual that it’s still difficult for me to comment on it. One thing is certain, no other manufacturer selling vehicles under $ 100,000 is able to offer such a variety of colors, coupled with a high quality of workmanship.

To list the very long list of gadgets on board would be endless. That said, Genesis does a great job of making the environment warm, comfortable and ergonomic, despite this high level of technology. Thus, let’s give a good note for the tactile experience of the heating / ventilation controls as well as for the central 14.5-inch screen, on which we can also navigate via this wheel which works like that of the first iPods.

Conversely, the instrumentation of models with four-cylinder engines is visually ugly, as is the design of the flywheel. Small consolation, know that by climbing hierarchically in the range, you are entitled to a 3D instrumentation, allowing you to first target the essential and then easily seek the balance of information. Of course, there is also the head-up display, reflecting to the windshield some data that you would have selected yourself.

Yes, let’s say! First, know that it is inevitable to opt for a version with a V6 engine to access a third row of seats. Unfortunately, it is not easy to access and is only reserved for young children, further compromising the cargo volume, even when the seat is lowered. So don’t consider the GV80 if you’re going to use this bench on a regular basis. Fortunately, the occupants of the first and second rows enjoy royal treatment, both in terms of space and comfort.

The mechanical offerings of the GV80 are straightforward. A 2.5-liter turbocharged four-cylinder producing 300 horsepower, or a twin-turbo 375 horsepower V6. In both cases, all-wheel drive and eight-speed automatic transmission are required. Hybrids? Electric? Not at the moment.

At first glance, the four-cylinder seems a tad weak, probably because the habit in this segment is associated with V6s. That said, a 2.5T version will surprise you with its flexibility, its pickups and its very linear power. Power which, by the way, is greater than that of the four cylinders of the Q7, GLE and XC90 T5, by around 50 horsepower.

For its part, the V6 is obviously smoother and even more flexible, although the 75 horsepower in reinforcement does not transport us to another dimension. It makes you wonder if the V6 option is worth the effort. It must be said that by opting for the latter, you add a weight of about 150 kilos. A mass which is felt at the front and which affects the driving dynamics. However, also consider that the 22-inch rims offered as standard on these versions constitute an affront to our roads, which affect both handling and comfort.

Our impressions on the road? A vehicle which certainly does not offer the dynamics of a BMW X5, but which offers a nice overall balance and which impresses with its exceptional level of soundproofing and very high quality of manufacture. No creaking or noise of body, despite the presence of three rows of seats and a panoramic roof as standard. Also, a noticeable advantage for the 2.5T versions, which are more fun and manageable, although some attractive gadgets that are exclusive to the 3.5T Prestige model are not there.

Bold and unmistakably chic, the GV80 is certainly not lagging behind the competition. On the contrary, it teaches the most prestigious SUVs in this segment a lesson in humility, with technology, quality and service that will certainly appeal to some of the customers. And although the reputation of the brand is to be built, it has the advantage of not having to be rebuilt, as in the case of Cadillac, Infiniti or Lincoln. We can therefore already say that Genesis is in a good position, and that the coming years will be crucial.

On a more personal note, I would like to conclude by emphasizing that the GV80 is a breath of fresh air in a segment where monotony and gray-black-white are omnipresent. A product which dazzles, which dares, and which is supported by a manufacturer as serious as ambitious.

Share
Previous The rise in COVID-19 cases caused by Halloween?
Next La Petite Vie censored: “There was nothing biased in this episode” -Claude Meunier