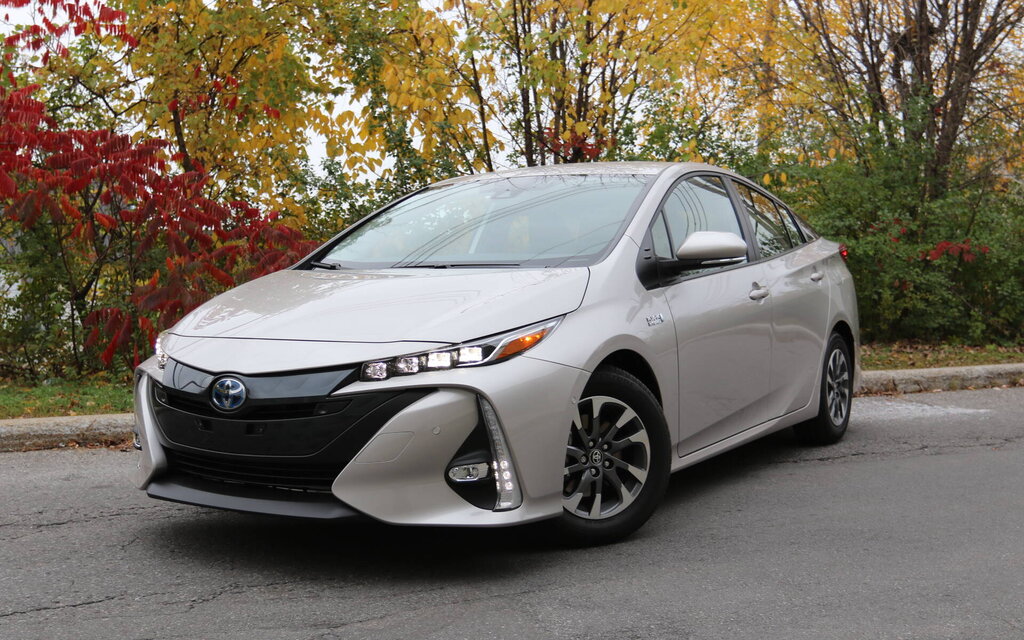 When you shop for a Toyota Prius, it’s because you want to reduce your fuel consumption and you are looking for a reliable vehicle that has no fuss.

For the 2021 model year, Toyota is making changes in continuity. Some changes in color charts, the arrival of Android Auto as standard with the multimedia system with a 7-inch screen, new specific rims for versions with the Technology package as well as blind spot detection with rear cross traffic alert in the version Upgrade.

Our test model is a Prius Prime Upgrade with the optional Technology Package. Thus equipped, the car costs $ 40,609 all taxes included and government rebate of $ 6,500 deducted.

Thanks to its 8.8 kWh battery, the Prius Prime can travel 40 kilometers without using a single drop of gasoline. During our test, the car drove 41 kilometers before the gasoline engine started.

Even with a lower temperature, the battery charge is maintained quite well. During a previous test, with a temperature of 0 °, the car was still able to travel 38 km with a full load, which remains interesting.

It took us 2 hours and 10 minutes to fully recharge at a 240 V electric circuit charging station. According to Toyota, it takes 5:30 hours when using a 120 V household outlet.

Once the battery was exhausted, average fuel consumption fluctuated between 4.5 and 5 L / 100 km depending on the conditions encountered. But it is difficult to give a precise figure since the average consumption will depend mainly on the number of recharges you will do before having consumed a full tank of gasoline. Total autonomy (battery and gasoline tank added) is announced at 1,035 km, which offers an excellent range.

But to benefit from the qualities of the Prius Prime to the maximum, it is more interesting to make short daily trips to take advantage of the 100% electric propulsion. If your daily commute is 40 km or less and you can charge the car every night, the Prius could be very economical in use.

Even on very rough roads, nothing seems to be able to disturb the comfort of the occupants sitting in the Prius Prime. The flexible suspensions obviously make it possible to isolate the passengers from the ugly Quebec roads, but do not penalize the handling which remains good. The Prius has no sporting pretensions and is not particularly dynamic, but gets through its task without complaint.

The steering, light, remains sufficiently precise, the stability is good in the curves, and the power of deceleration adequate. However, the pedal dosage could be improved, a flaw shared by many hybrid vehicles.

On the engine side, there is an atmospheric 1.8-liter 4-cylinder engine associated with an electric engine. The combined power comes in at 121 horsepower, which is enough to get from point A to point B, but not to get you tripped up.

When the battery is charged, acceleration and pick-up are good, and the cabin is quieter. Once the battery is depleted, the motor is heard a little too much and the pick-ups lose a little force. Quiet at low speed, the Prius Prime makes wind and rolling noises on the highway.

In the passenger compartment, space is very good for the occupants seated in the front, whether for the head or the legs. Even tall drivers will feel good behind the wheel. The space is a little less important at the back, but still adequate.

Facing the driver, our test model offers an instrument panel incorporating a large 11.6-inch vertical screen. Arranged vertically in the manner of a Tesla Model S or a Ram 1500, its handling is less intuitive than the two models mentioned above.

Unlike the first Prius Prime which only had four seats, Toyota added a traditional bench seat that receives three seat belts. A central place to use for troubleshooting, but which improves the versatility of the car.

On the other hand, the large batteries encroach on the volume of the trunk. With a volume of 561 liters, it is also its flattened shape that complicates the loading of bulky items. To give you an idea, a classic Prius has a maximum volume of 776 liters. A difference which is not negligible.

Since it is about the trunk, know that the two-part tailgate, with a divider bar, reduces visibility to the rear. The hollowed-out rear window is not very practical in winter because snow tends to accumulate there.

In conclusion, if you make short trips on a daily basis, don’t need to load large items, and are looking for a pragmatic vehicle, the Toyota Prius Prime could be a good fit for you. Especially since its expected reliability is very good, the Prius having largely proven itself in recent years.