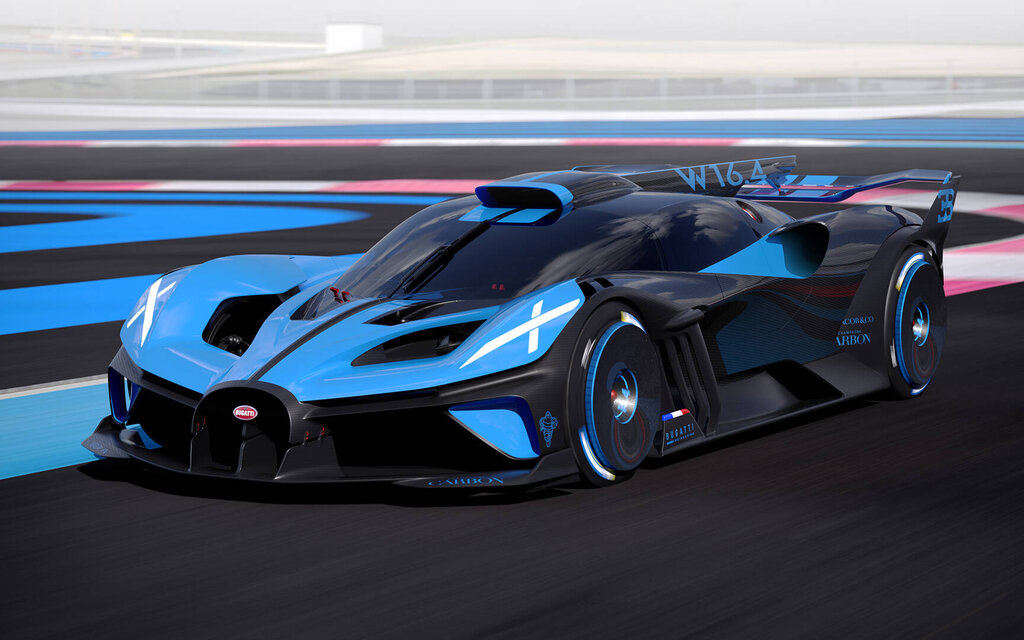 What would happen if Bugatti developed an extreme hyper sports car designed for circuit racing with an unprecedented power-to-weight ratio? Today we have the answer.

Here is a brand new concept at the cutting edge of technology and performance which is simply called “the Bolide”.

Inspired by the Bugatti Type 35, one of the most famous racing cars in history which won more than 2,000 victories between 1924 and 1930, this modern monster designed exclusively for track competition houses the legendary W16 engine of 8.0 liters that here develops up to 1,825 horsepower on 110 octane racing fuel. And yet, it weighs only 1,240 kilograms (2,734 pounds) dry.

In terms of torque, it stands at 1,364 lb-ft. The result: Bugatti’s Bolide is capable of reaching a top speed well above 500 km / h and, according to simulations, it would complete the famous Nürburgring Nordschleife in 5:23 minutes. This is absolutely crazy!

“What was important in our thinking was to take advantage of our iconic powertrain without any specific power limitation. It is from this reflection that the Bolide Bugatti was born, explains Stephan Winkelmann, President of Bugatti. An experience without compromise, a thoroughbred which, in its raw exclusivity, convinces above all with its high performance, low weight and a driving experience in new dimensions. Riding in the Bolide is like riding a cannonball. ”

To achieve this, engineers optimized the intake and exhaust systems, redesigned the four turbochargers as well as the lubrication and cooling circuits. They have of course opted for the lightest materials available. For example, the structure is made of carbon fiber, while all the screwing and connecting elements are made of titanium. Several components have extremely thin but nevertheless very robust walls, some 3D printed, which withstand operating temperatures of up to 260 degrees Celsius.

As in Formula 1, the Bolide decelerates with a side-pull brake with ceramic discs and linings; the brake calipers weigh only 2.4 kilograms each. The forged wheels with central locking are made of magnesium and fitted with very wide tires of 340 millimeters at the front and 400 millimeters at the rear.

Aerodynamically, the huge air intake on the roof is a world first, says Bugatti, which allows active optimization of airflow according to the speed of the car. At 320 km / h, the downforce is 1,800 kilograms on the rear wing and 800 kilograms on the front wing.

It should be noted that the design was created more according to technical considerations than aesthetic, but without compromising the image of Bugatti. Overall, the Bolide is more like very aerodynamic Formula 1 cars than classic sports vehicles. At the same time, the X signature on the back is reminiscent of the Bell X-1 jet plane with which Chuck Yeager broke the sound barrier in 1947. Only about 40% of the surfaces are painted in a new interpretation of the famous ” French Racing Blue ”.

In terms of dimension, the Bolide is just 995 millimeters high – 300 less than the Chiron. The wheelbase is 2.75 meters, while the width reaches 1.99 meters. The hinged doors at the front open at an angle upwards like the LMP1 racing car.

Bugatti has not yet decided whether its Bolide will be mass produced or not. We keep a very close eye on this.