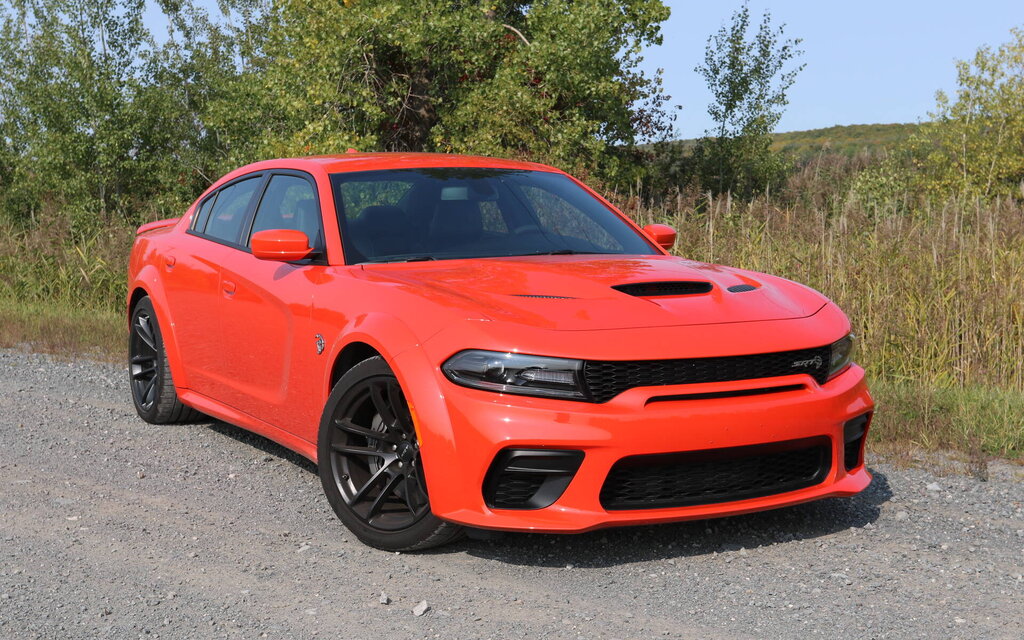 Contact. Start-up. The engine instantly roars as the needle stabilizes at idle speed. The knockdown torque of the large 6.2-liter V8 shifts the car slightly from side to side with each press of the accelerator.

On the central screen, the interface indicates that the gun start system is activated. The accelerator is full, the brake firmly pressed. As soon as the left pedal is released, the Dodge Charger Hellcat instantly takes off with a beastly howl.

The supercharger whistles with all its might as it fills the V8 with fresh air. The rear axle, whose tires saturate under the load of the eight pistons, oscillates from left to right, drawing a few commas of rubber on the asphalt.

A few seconds later, the accelerator is completely released. The maximum speed allowed in Quebec has already been reached.

The adrenaline rush didn’t last long, and for good reason. The performance of the Charger Hellcat is simply astounding. Capable of going from 0 to 100 km / h in 3.5 seconds, the car catapults you to stratospheric speeds at the slightest request. And it does so with such brutality that reaching 200 km / h is a mere formality.

Especially since once the car has stuck you in your seat when starting, the thrust remains straightforward and continuous, as if the reserve of power and torque were inexhaustible. The engine takes little revs (less than 6000 rpm), but rushes towards the red zone with enthusiasm. It must be said that with 707 horsepower and 650 lb-ft, the figures speak for themselves.

That’s all the paradox you experience when driving this sedan like no other. It gives you chills with every acceleration, but makes the speedometer climb so fast that you have to immediately release the pressure, otherwise you will end your walk with your pockets full of tickets… or on the dock in a court!

What about everyday driving?

Surprising as it may sound, the Charger Hellcat is capable of tackling the daily grind. Spacious, it offers enough space for occupants, both front and rear. The front seats are soft and very comfortable, even on long journeys. The rear seat also offers good comfort, and the trunk can accommodate a lot of stuff. From this point of view, the Hellcat is as practical as any Charger.

When the road is well paved, the Hellcat behaves like a larger SXT version which shines less well. The engine readily complies with a casting, its truck torque having no difficulty in moving the car from the lowest revs.

It’s when the road gets rough that it gets complicated. Dodge has logically endowed its Hellcat with sportier suspensions, which hit hard when the road is degraded. On the other hand, we regret the fact that there is no “silence” mode for the escapement. The sound of the V8 is spellbinding when you drive enthusiastically, but we would appreciate a few decibels less so as not to wake the neighbors when we start the car in the early morning or late at night.

It will also be necessary to think about planning a significant fuel budget. In our test, the average fuel consumption was 16.2 L / 100 km. In town, the display indicated 25 L / 100 km… ie 2 L / 100 less than its actual consumption! By stroking the right pedal and driving on secondary roads, we managed to consume between 11 and 12 L / 100 km. As you can see, if you buy a Hellcat there is a good chance that you will know all the clerks at the nearest gas station!

Showy on the outside, discreet on the inside

Our test model, sporting a rather conspicuous orange color, is a Hellcat Widebody with an Alcantara and Carbon package, the Navigation Package and the Convenience Package. In total, these options bring the price to $ 92,825.

When you lift the hood, you obviously get what you pay for. But this is a little less true in the interior. Our test model, rather dull, does not stand out particularly by its quality of finish. The optional alcantara and carbon inserts enhance the perceived quality, but the cheap plastic in the doors or the dashboard is hard to justify in an auto that will go over $ 100,000 once taxes are included.

With a price three times higher than a Charger SXT, the Hellcat version is not really cheap. But it represents all the American excess brought together in one vehicle. At a time when ecology and reasonable consumption of resources are logically put forward, the Hellcat takes pleasure in burning as much fuel as an airplane while making its big V8 howl with pleasure.

Whether it is the Charger or the Challenger with the same engine, these cars are the latest heirs to the true muscle cars from the end of the 1960s. Yes, the charger has all the trouble in the world to bring its power to the ground. And it must be recognized that its handling is much lower than that of a German, but it provides truly unique sensations. And it’s her marked flaws that makes the hellcat so endearing.

Love or hate the bet taken by Dodge, the decision-makers have dared to release a supercharged sedan capable of exceeding 300 km / h. Yes it’s useless, yes it’s disproportionate, but in an increasingly wise and conformist world, isn’t this the exception that proves the rule?

Share
Previous ShopRite Classic: Brooke M. Henderson Closes to the Top
Next Lotbinière: a suspect dies in a shooting with the police in Saint-Agapit